Suspense film about the limits of creativity and madness.
Bisexual novelist Gerard Reve lives in a twilight world where strange fantasies mix up with reality. Those who know him think he is mad, those who read him think he is brilliant and unusually lucid. When Gerard begins to suspect that his female lover is planning to kill him, is he imagining it all, or is he about to become her fourth victim? A dazzling, unfairly forgotten film which refuses to make things easy for the viewer, this is an original story with some memorable images (including a homoerotic fantasy involving a crucified Jesus). Director Paul Verhoeven is a great stylist and story-teller. He is best known for his futuristic thrillers Robocop, Total Recall, and Starship Troopers. Among queer audiences, he is famous for directing the controversial Basic Instinct, which in 1992 catapulted Sharon Stone onto the limelight, and which angered enough gay and bisexual people that the first massive anti-homophobic film boycott was soon underway. Well, here is another bisexual psycho for you —but this time, thirty years on (after the explosion of “queer cinema”, which refused to portray us as “nice” people), we may just be prepared to ignore the inessentials and appreciate an interesting, challenging, and beautifully shot film. 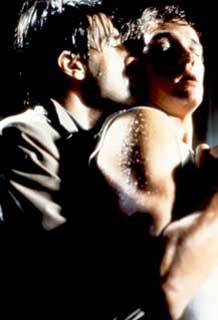