2.00pm
A thirteen-year old boy starts a journey along the Venezuelan coast. In order to survive he captivates people by constantly reinventing his own story; his true past, however, will gradually become clearer. Ten years ago a mudslide took his mother, now he thinks he can find her. He has a difficult road ahead of him, but there is also a world yet to be discovered.
Directed by Marite Ugas.
In Spanish, with English subtitles.

La Hora Cero [Zero Hour]
3.50pm
A film set and filmed in Caracas, the big-screen debut of a Venezuelan director born and raised in the United States whose short films have won more than twenty-six awards. Set during the 24-hour national health strike that paralysed the city’s public hospitals in 1996, it follows a fictional hitman who takes control of a private hospital to save his pregnant girl-friend.
Directed by Diego Velasco.
In Spanish, with English subtitles. 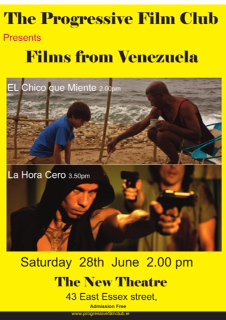