“Hypothetical. A challenge. A test. You are all perfectly safe.”
A woman living alone on the top floor of a tower block dreams of a dystopian city. A man stays up every night playing games about gods with strangers. Both are drawn to one another by the black-hole pull of each other’s isolation.
A washed up goddess takes the role of a late night TV host in an apocalyptic future. Broadcast straight into the minds of her bloodless watchers, she embodies entertainment.

The New Theatre Residency Programme
Pink Milk was developed under The New Theatre’s residency programme supporting new artists. Nora Kelly Lester and Lauren-Shannon Jones are in residence at the theatre for 2015/16, and are the first artists to take part in the scheme. The residency grants artists the space and support to develop new works to premier on The New Theatre stage.

Nora and Lauren have been working collaboratively since their first play Grow in 2013. Following the success of this production they were commissioned by The New Theatre and funded by UNESCO to create a piece of theatre commemorating The Battle of Clontarf in 2014. The resulting production The Assassination of Brian Boru toured nationally following a successful first run. Having established a relationship with The New Theatre, Nora and Lauren were selected to front the theatre’s first ever emerging artists development programme. 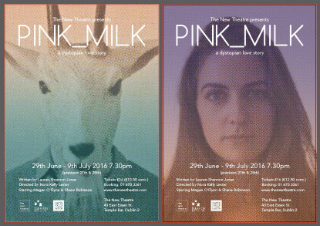