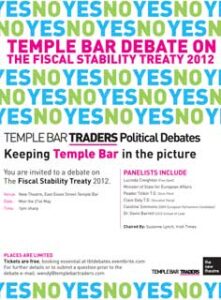 Temple Bar Traders Association, the not-for-profit organisation that represents business, Arts and services in the area arranged a debate on the fiscal stability treaty in Temple Bar. The debate aimed to engage and inform business and arts organisations in the area on the upcoming referendum.
Panellists included Minister of State for European Affairs Lucinda Creighton, Dr.Gavin Barrett UCD School of Law, Peadar Tóibín TD Sinn Féin and Clare Daly TD Socialist Party.
The debate was chaired by journalist Suzanne Lynch.

Read a review of this event in The Irish Times
Martin Harte Managing Director with Temple Bar Traders hoped that the event would make the Temple Bar Community in Temple Bar aware of the effect that the referendum will have “We think that it is vitally important that the business and cultural organisations in the area are aware of the impact that a yes or no vote will have on the Temple Bar Area. For example many arts organisations rely on funding from government bodies and they will need to know how they will be affected. It is estimated that approximately 15pc of the entire national spend on arts activities comes to organisations based in Temple Bar. In this debate the importance of the Temple Bar area must be recognised. The Temple Bar area is responsible for 1/6 of the Irish tourism product, 1/3 of the Dublin Cities Turnover and employs 10,000 people. As a key player in the Irish economy understanding the effect of the Fiscal Stability Treaty is of utmost importance – we hope that this debate will give those in the area a clearer understanding of its effects.”
This debate is particularly relevant to the Temple Bar area given the amount of EU funding that has been invested in the area. In the early 1990s Temple Bar Properties Limited received an initial grant of £37million and was allowed by the EU to raise additional funding of another £40 million and another amount through its property portfolio in total expending £140Million on the plan repaying all but £40Million treated as seed money; the private sector has invested in excess of £100Million up to 2001.
About Temple Bar Traders
Temple Bar Traders (Traders in the Area Supporting the Cultural Quarter Ltd) was set up in 2003 by a number of traders in the Temple Bar Area. The company’s mission statement is ‘to promote the arts tourism, trade and commerce in the Temple Bar area’. Temple Bar Traders is an independent organisation, which represents traders in the Temple Bar area. Membership of Temple Bar Traders is voluntary and we now have over 100 members, representing a broad spectrum of businesses, organisations and resident associations in Temple Bar. These include restaurateurs, hoteliers, publicans, retailers, cultural centres, charities, resident groups and service providers who operate in Dublin’s Cultural Quarter. These groups have come together to form Temple Bar Traders with the aim of enhancing the local environment and promoting Temple Bar both at home and abroad. Each member pays a voluntary annual fee and these funds are used to improve the physical environment, organise events, and liaise with local authorities and to market the area nationally and internationally.
For Further details please contact, Director of Communications and Events, Wendy Grace wendy@templebartraders.com
01 7030707 / 0860417954