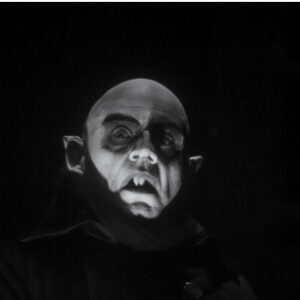 Congratulations to Just Theatre for their complete, scene-by-scene recreation of F.W Murnau’s 1922 film ‘Nosferatu: Symphony of Horror’.
Arguably the masterpiece of the first golden age of cinema, FW Murnau’s infamous Nosferatu 1922 set the benchmark high for the horror genre. Just Theatre returned with their stage version. Integrating vivid stage performances with footage from the original to spectacular effect.
“An ambitious and clever production that opens the door for many other productions of a similar nature. It’s an original and creative production that will leave you with a smile on your face at the end of the evening”
– No More Workhorse
“A very interesting piece of theatrical invention…the integration of the acting and the silent film is very well orchestrated”
– The Irish Mail on Sunday