A Look Back at Recent Shows – What have you been missing? 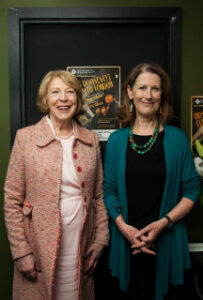 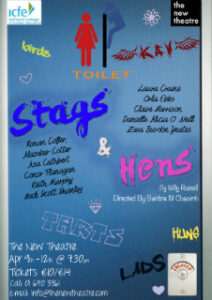 Mrs Roosevelt Flies to London
The responses to Alison Skilbeck’s performance of her own play were overwhelmingly positive.
It showed one of the most extraordinary women of the 20th century as she looked back over her journey from unhappy child to the ‘First Lady of the World’.
First ladies and leading ladies – Alison Skilbeck even enjoyed a visit from our very own First Lady, Sabina Higgins (pictured above)
‘”Breathtaking” – Emer O’Kelly, Sunday Independent.
“You’ll leave the theatre feeling uplifted and inspired” **** – performancereviewed.com

Stags and Hens
Congratulations to the students of Inchicore College of Further Education on their final year production of Stags and Hens, by Willy Russell. This was their end of year show which drew a great audience and even saw one of the cast – Asa Cuthbert being spotted by a casting director for Fair City. We at the New Theatre wish the students all the very best for their future careers! Among other positive castings – news to follow.
Directed by Báibre Ní Chaoimh, Willy Russell’s play is a witty depiction of the familiar pre-marriage ritual, with perceptive comments about intellect, life, party habits and the exclusion of the different.
Now in its 28th year of providing excellence in drama training, Inchicore College of Further Education is proud to present the graduating class of the the Theatre Studies Performance Course in their final year production. 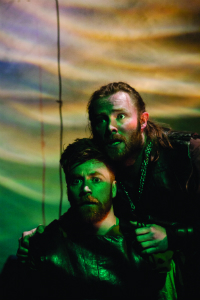 The Assassination Of Brian Boru
To mark the 1000 year anniversary of The Battle of Clontarf, we were delighted to host the new play The Assassination of Brian Boru by Lauren Shannon Jones. The play was hugely successful receiving rave reviews and was sold out every night – due to this the production will be back for a second run in July, so those who missed it first time be sure to get your tickets to see this amazing show.
Two brothers of conflicting ideals sail to Ireland to defeat the High King Brian Boru. Over the course of the journey they part enemies, and meet again on opposite sides of the battlefield.
“Mac Suibhne has an intensity that underpins the nature of Ospak, and his acting never wastes any movement, each thoughtful and in keeping with the moment, giving an artistry to his interpretation. Both actors create a clear, sobering moment in the final scene.”
– Alan Foran, The Red Curtain Review. 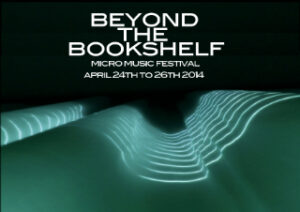 Beyond The Bookshelf
The New Theatre saw its doors open to guitars, amps and some Rock ’n’ Roll! “Beyond the Bookshelf” is an independent micro music festival. Now in its 4th year, it’s probably the smallest festival in the world with only a 66 person capacity. The Theatre’s location at the rear of the Connolly Book Shop gave rise to the festival’s name. Over the past 4 years the festival and additional one off events have been hosts to over 40 musical acts from Ireland and further afield!
Acts included Si Schroeder, Dylan Tighe, Brian Mooney, The Statics,Rufus Coates and the Blackened Trees and Niall Thomas.
We look forward to hosting the festival again next year. 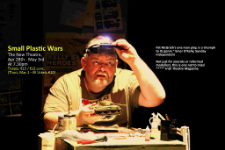 Small Plastic Wars
In association with Bealtaine Festival, The New Theatre was delighted to host Pat McGrath’s one-man play, Small Plastic Wars. With sold out shows, lots of laughter and three curtain calls, it’s fair to say that Small Plastic Wars was a hit with audiences.
When finally getting the opportunity to fulfil his dream, all be it through unemployment, Joe seizes it. His only desire is to immerse himself in his hobby and realise his life time ambition of building his tiny model world. With a competition coming up, it’s his time to shine, so the pressure’s on, but with his wife, his daughter, the bank manager, Angela Merkel, his nemeses Hermann and even the check out girl in Tesco’s conspiring against him, can Joe realise his dream in the face of real world demands?
“Pat McGrath’s one-man play, Small Plastic Wars, is a triumph of the genre” – Emer O’Kelly, Sunday Independent.
“McGrath’s wonderful performance does justice to his hilarious, well-paced script.” – Irish Times
“This is an engaging one man show, tightly scripted and adeptly delivered by McGrath.” – The Sunday Times

Gay Theatre Festival
We had a wonderful two weeks of performances from the Gay Theatre Festival, shows included:
Eirebrushed, A revolutionary story of love and courage, challenging history to complete the identity of the heroism of 1916 and challenging us to hear it today.
All the way from Australia and a European premier brought a thought provoking play, A Boy and A Bean. The play was a twist on the classic fairytale ‘Jack and The Beanstalk’ set in contemporary Sydney, with a marriage equality message. The story was charmingly delivered by Nick Atkins in an hour of intimate theatre that just flew by.
In week two we saw another European premier, Civil Parting, A South African production. Glenn and JP were among the first gay South Africans to get legally married. The ‘seven year itch’ has turned things sour. As respectable, upstanding members of the community, they’ve resolved that the best course of action is to divorce amicably. But that’s before the lawyer is ‘delayed’ and they are left unsupervised in his waiting room.
Last but not least we saw, Margaret Thatcher Queen of Soho! The show was very popular with audiences and created a great buzz in the theatre. On the eve of the vote for Section 28 (UK’s 1980s anti-gay law) Maggie gets lost in Soho and ‘accidentally’ becomes a cabaret superstar!
A camp odyssey about gay rights, politics, sex, the 80s and disco! 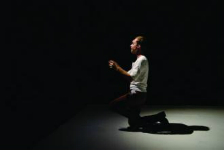