A Tribute to Board Member Phelim Donlon 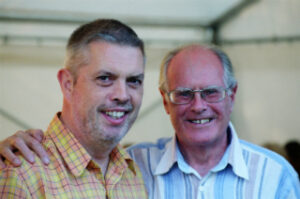 Phelim Donlon (1936-2014)
And did you get what
you wanted from this life, even so?
I did.
And what did you want?
To call myself beloved, to feel myself
beloved on the earth.
(Raymond Carver)

On a December midnight Phelim Donlon slipped into the wings one last time and forever. Accustomed to that pivotal place, Phelim was always too keenly invested to be just a spectator and too self-effacing to be a performer. He spent a lifetime in the wings: organising, facilitating, encouraging, and prompting. In mid-career he came to the Arts Council, a natural milieu and vocation for one who combined the skills of the theatre manager (general/house/company) and the convictions of the committed and independently-minded public servant. For nearly twenty years during a period of extraordinary development in the arts he was advocate and arbiter, counselor and confident, strategist and sage.
Before terms like ‘organisational culture’, ‘conflict of interest’ or ‘evidence-based policy-making’ became part of the lexicon of the Arts Council, Phelim embodied the values of fairness, dignity and probity and he practiced the behaviours of empathetic listening, close reading, and on-the-ground visitation that underpin such terms. For some years Phelim was the officially designated personnel officer at the Arts Council. In truth, for every one of his years here his office had a swing door, admitting practitioners and colleagues. Almost always they left feeling better understood and more self-confident about their endeavours.
For all his expertise and earnestness he is remembered also and fondly in 70 Merrion Square for his quips and his banter, his love of the arcane expression, his nice allusions, his mock outrage, his quizzical eyebrow set in that tilted senatorial head, and his attraction to paper such that it seemed he did not so much have a filing cabinet in his office as the reverse.
His funeral service, the tributes of friends and colleagues, the stories told – and doubtless embellished in a manner he would have relished – are testament to a man with an enormous gift for ‘making family’. That gift extended beyond the private realm to include what we term ‘the arts sector’. It certainly included the Arts Council where for so many and for so long he was the pater familias.
Stay watchful in the wings forever Phelim, and be assured that you were and are ‘beloved’.
– Martin Drury

B. 17th July 1936
D. 14th December 2014
This photo was taken on the occasion of Phelim’s 70th Birthday, with David McConnell our Finance Manager.
Phelim worked in the Arts Council from 1983 to 2001.
We were lucky to have him on The New Theatre’s Board of Directors from August 2007, and is sadly missed by all here.
His obituary appeared in The Irish Times on Dec 20th.