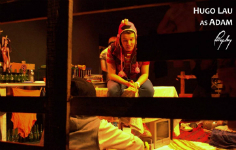 We began the new year with Fireplay by Cyclamen Productions (5th – 10th Jan) – a brilliant piece of new theatre from a young, up and coming company.

‘Beautifully measured… a golden connection with the audience is truly felt.’ – Musings in Intermissions 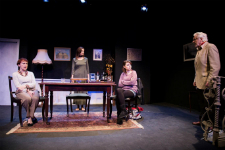 ‘the plot twists and excellent delivery worked to keep the audience entertained throughout.’ **** – The Public Reviews

…and we finished the month with sell-out houses for Samuel Beckett’s The End (26th – 31st Jan) performed by the fantastic Marcus Lamb and brought to us by Mouth on Fire.

‘The coupling of darkness and comedy here is balanced perfectly’ – The Public Reviews.
‘This striking piece is delivered with charm by Lamb’ – Red Curtain.

February began with the world premiere of One Is Not Oneself by Gerard Lee (2nd – 14th) – a play inspired by Noel Coward, and including a selection of his songs brought to us by Cadence Theatre Company.

“thoroughly enjoyable and funny… Matthew Ralli succeeds in directing a play that is both uplifting and life affirming.” – Helen O’Leary, No More Workhorse.
“On display are two accomplished performances that get to the core of the emotions, while also bringing out the right feel, tone and sound of Coward’s songs… hopefully we will see more off from Cadence Theatre Company and Gerard Lee.” – Alan Foran, The Red Curtain Review. 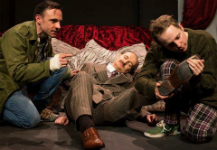 and February comes to a close today with the final day of the very popular Orphans by Lyle Kessler, a coproduction between Alchemy 8 and Breaking Good for which they have been receiving wonderful reviews.

‘Wonderfully tense atmosphere throughout..’
‘Theatre for the senses….and here the senses are hit!’,
‘Wonderful ensemble piece that holds your attention from start to finish’ – The Red Curtain Review
‘…performed with great conviction…like a terrifying primal scream recommended to theatregoers who like drama that goes straight to the gut…’ – Sunday Business Post 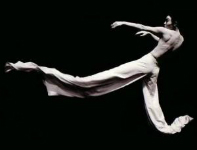 We also had New Writing galore with rehearsed readings of Line of Descent by William McCauley (Prima Facie Theatre), Tiger Deli by Robert Mc Dowell, and The Big Girl by Hugh Travers, and the brand new Butoh Film Festival by Moving Bodies.