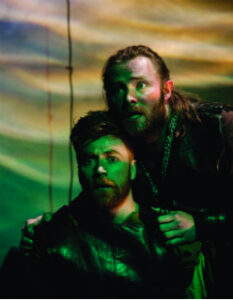 Wed 6th May – WATERGATE THEATRE, Kilkenny City – (056)7761674
Fri 8th May – SOURCE ARTS CENTRE, Thurles – (0504)90204
Thurs 14th May – DROICHEAD ARTS CENTRE, Drogheda – (041)9833946
Two brothers of conflicting ideals sail to Ireland to defeat the High King Brian Boru. Over the course of the journey they part enemies, and meet again on opposite sides of the battlefield.
Brian Boru was assassinated in the battle of Clontarf 1014 – A story of brotherhood, blood, ravens on the battle field and the death of a great king.
“…entertaining, well-cast and very well written.” – Michael Moffatt, Evoke.ie
“Mac Suibhne has an intensity that underpins the nature of Ospak…” – Red Curtain
For more info click here