A Portrait goes to Wales 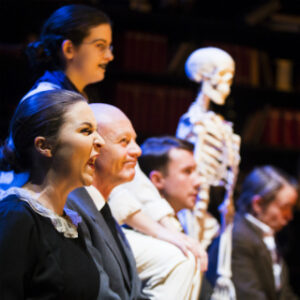 With Brian Boru still on the road until the middle of May, and Madame de Markievicz playing to full houses until the end of the week, we have yet another beautiful production to offer.
Having travelled the four corners of Ireland, hopped over to Paris last summer, and delighted audiences and critics everywhere it went, our production of Joyce’s A Portrait of the Artist as a Young Man is getting set to cross the waves once more next week.
It will play at the prestigious Celtic Festival in Clwyd Theatr Cymru in Mold, from May 4th – 9th.
“What makes this production such a success is how director Fay allows the language to do the work, which Joyce uses like a musician as he entices us to hear his song” – Belfast Telegraph
**** “A fine adaptation of a great novel” – Irish Examiner
“At times unsettling, always entrancing”
“There are powerful performances from the entire ensemble”
“The simplistic set and stunning lighting design.”
– Meg.ie
“another fine display by Jimmy Fay” – No More Workhorse
“Joycian style incarnate” – Entertainment.ie
Directed by Jimmy Fay
Adapted by Tony Chesterman
Cast
Lauren Farrell
Charlie Hughes
Sam McGovern
Katie O’Kelly
Patrick O’Donnell
Set Design – Orla Reynolds
Lighting Design – Cathy O’Carroll
Costume Design – Jessica Dunne
Sound – Shane Fitzmaurice
Film – Neil O’Driscoll