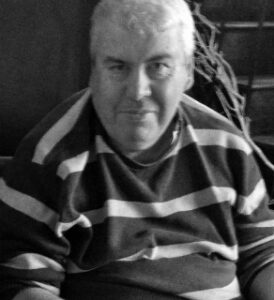 The New Theatre’s national and international touring shows of ‘A Portrait of The Artist as a Young Man’ by James Joyce and ‘The Assassination of Brian Boru’ by Lauren Shannon Jones were made possible by the great Richard Ryan.
He taught me about the possibilities of touring and increasing the brand of our small theatre across Ireland and internationally.
Because we didn’t have touring funding each tour had to break even. I learned from Richie the value of pushing ahead with ambition, being bold and that perseverance wins in the end.
In Wales, while on tour with ‘A Portrait’, Richie made it his final step. He passed away on May 3rd 2015 while in my company.
I’ll never forget his genuine friendship and courage.
At Richie’s memorial in The Clarence Hotel – Samuel Beckett’s publisher sent a note to read aloud to the artists, TNT staff, TNT board and crew members who were present:
“Richard Ryan was a friend, a colleague, a co – worker in the hard battle to bring a relevant modern culture, largely Irish based, to a public still only partly familiar with the major writings of the 20th century.
Larger-than-life both in body and ambition, he breathed new life into everyone he met and knew, and his ebullient personality easily affected everyone who crossed his path.
He will be much missed and no-one can adequately replace him”.
John Calder
May 2015
Paris
Richie, we will miss your laughter and celebrate your memory for many years to come.
Is mise,
Anthony Fox
Artistic Director
The New Theatre