Director and Writer In Residence

Home  /  News   /   Director and Writer In Residence
Back to news 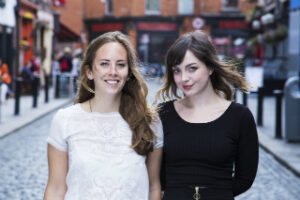 The New Theatre is proud to announce our first Director/Writer Team in residence:
Nora Kelly Lester
& Lauren Shannon Jones.
Nora and Lauren were the Director/Writer team behind the very successful THE ASSASSINATION OF BRIAN BORU which played The New Theatre and also toured Nationally in 2014/15.
They also worked together in 2013, on Grow which also played at The New Theatre.
‘ OLYMPIA ‘ their new show will open here in October 2015.
Some praise for their previous work together
“..this young production shows great verve and promise….clever with plenty of twists and turns..” – Le Cool Magazine (about “Grow”)
“Lauren-Shannon Jones’s play is entertaining, well-cast and very well written.” ****
– Michael Moffatt, Evoke.ie (about “The Assassination of Brian Boru)