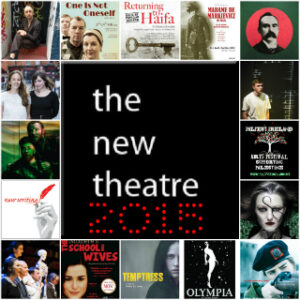 Of course we’re well and truly into 2016 by now but we thought we’d take a moment to look back at the year gone by.

And what a year it was – with 50 shows on our stage, 35 of which were new writing productions. The theatre also hosted 6 festivals, produced 2 national tours and 1 international tour!

On The New Theatre stage, January got off to a good start featuring Mouth On Fire’s Production of Beckett’s The End – an “exquisite” performance from Marcus Lamb.

February saw the World Premiere of One Is Not Oneself by Gerard Lee – a play inspired by Noel Coward, and including a selection of his songs.
In March we returned to Returning to Haifa, our popular production of the stage adaptation of one of the most iconic works of Palestinian resistance literature.

Our production, Madame de Markievicz on Trial by Ann Matthews hit the stage in April providing a fresh look at the information surrounding this historic figure.

In May the theatre was host to the James Connolly Festival, featuring poetry, music, theatre and debate from many contributors such as Gabriel Rosenstock, Donal O’Kelly, Sean O’Casey, and Mark Geary.

The highlight of June, for us, was Ballyfermot Youthreach’s fantastic If Walls Could Talk, presented in association with The New Theatre. This was the first full production devised by The Unknown Theatre, after the success of the group’s project the year before.

PalFest – an arts festival organised by Irish artists in solidarity with the besieged people of Gaza, the Palestinian territories and the Palestinian diaspora in exile – presented The Luthier by Lucy Caldwell, Bitterenders by Hannah Khalil, and The Olive Tree by Katie O’Kelly over 3 days in July.

In August AC Productions hilarious production The School for Wives had them rolling in the aisles and selling out the auditorium in a new version by Peter Reid. – “an Impish romp overlying an undercurrent of vicious satire” – Emer O’Kelly

September, as usual, was festival time!
Tiger Dublin Fringe brought us new exciting shows and companies from around the country, and Dublin Theatre Festival brought us Gavin Kostick’s At The Ford from Rise Productions.
Meanwhile rehearsals were underway for Lockdown, which was first seen back in October – A Satirical Comedy about War and Remembrance which received particular praise for Amy O’Dwyer’s “ability to sink into the role” of Captain O’Farrell navigating the challenges of coordinating a fitting commemoration for 1916. Lockout is now returning for a second run to kick off the 2016 season.
This month, too, we saw the first contribution from our Writer and Director in Residence team – Pygmankenstein’s Olympia. This was a stylishly gothic yet modern production of E.T.A Hoffmann’s horror story, The Sandman adapted for the stage by Nora Kelly Lester and Lauren Shannon Jones.

This was followed by Phillip St John’s Temptress an “enthralling and fun” play rounding off the Halloween season and earning much praise for all aspects of the “masterclass production” directed by Matthew Ralli.

In November The School for Wives returned due to popular demand for a second sell-out run.

Our production of Stewart Roche’s long-awaited new play, Snake Eaters
, tackled some difficult topics but brought us wonderful performances from the fantastic cast. The well-deserved praise was not lacking from critics and audiences alike – “Roche’s dialogue is crisp and laconic….with a great deal of credibility under Fitzgerald’s direction…excellent performances….thumbs are very definitely up.” – Emer O’Kelly, Sunday Independent.

Tours
Outside of the New Theatre auditorium our productions of A Portrait of the Artist as a Young Man and The Assassination of Brian Boru toured extensively nationally between February and May. Portrait also visited the beautiful Mold in Wales back in April

New Writing
2015 was a another great year for new writing here at The New Theatre:
Tiger Deli by Robert McDowell was seen first as a rehearsed reading in February and later went on to full production in August.
Microdisney by Neil Flynn had it’s rehearsed reading in April and the full production will go onstage later this month.
2015 New Writing Week, in November, featured Dummy by Emma Hughes, Another Billy Conn by Andrew Kenny, Normal by Caitríona Daly, Drawing Crosses on a Dusty Windowpane by Dylan Coburn Gray, The Entrepreneurs by Neil Pearson, and Loveboxxx by Lauren Shannon-Jones. Lookout for some of these returning in 2016.

Other
In 2015 The New Theatre was host to several film clubs and festivals –
Dublin Film Qlub
Progressive Film Club
Dublin Greek Film Fest
Feminist Film Fest
Butoh Film Fest
Last year we were also joined by Emma Hughes as Front of House Manager, we began an exciting new Writer and Director in Residence relationship with Lauren Shannon-Jones and Nora Kelly Lester, and we bid a sad farewell to Richie Ryan, our Tour Manager for many years, who passed away “in the line of duty” while on tour in beautiful Wales.
2016 will be an exciting year, and we can’t wait to see you in the new look New Theatre to share in some of this year’s highlights.