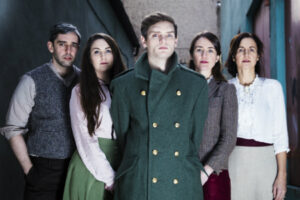 The production earned some glowing reviews in the press:
“Triumphant”
“Humphreys manages to create the sweep of history with extraordinary finesse”
“Beautifully directed by Anthony Fox”
“Sensitive, deeply felt performance from Ethan Dillon”
– Emer O’Kelly, The Sunday Independent
Now we’d like to extend our gratitude to our Friends and supporters without whom it really would not have been possible.
For their work in the area of developing New Writing at The New Theatre, we would also like to thank Nora Kelly Lester, who was instrumental in bringing many new scripts to the stage, and Chris O’Rourke, who came on board as Consulting Literary Director, particularly working with Michael Marshall on Happy Birthday Jacob which is to return in August.
We wish them both every success in their future endeavours.