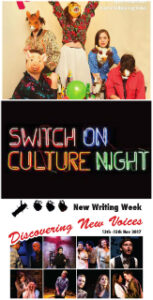 We had a fantastically successful festival season with many sell-out shows for both Fringe and Dublin Theatre Festivals.

This was topped off by All Honey, written by Ciara Elizabeth Smyth (our 2018 Writer in Residence) winning the Fishamble New Writing Award at Dublin Fringe Festival. All Honey was featured in The New Theatre: Dublin’s New Writing Week 2016 so it was great to see it back on The New Theatre Stage as part of the festival, and winning this well-deserved award.

We also had an amazing response to Culture Night 2017 at The New Theatre, with 600 people attending The New Theatre and our rehearsal room – including two Fringe Festival shows and a new play NORAH by Gerard Humphreys and directed by Anthony Fox. This play will open in April 2018 and Tour to Friarsgate, The Dock, The Lyric, Watergate, Pavilion and Riverbank.

You can see footage of our Culture Night events here (from 1:20)
Further to this we are looking forward to our own New Writing Week next month which is coordinated by Jane McCarthy.
We are delighted to announce that the writers and plays selected for our New Writing Week 2017 are:
Brendan Griffin – ‘The Toastmaster’
Ciara Cassoni – ‘Giddyup’s Way’
Shane Gaffney – ‘The Monday BC’

In addition to three full readings, 9 writers whose scripts showed huge development potential have also been selected to showcase their work through a series of scenes each evening. Those writers are, in no particular order:
Jessica Freed – ‘Waking The Land’
Christopher Moore – ‘Hotel Eirene’
Anne Anderson – ‘Chemistry’
Daniel O’Brien – ‘Daddy’
Nadine Flynn – ‘DIRT’
Jim Connell-Moylan – ‘The Bull: Death of a Laydiez Man’
Gavin Turtle – ‘A Certain Kind of Man’
Krystal Sweedman – ‘Black Cherry’
James Ireland – ‘World-Perfect’
If you’d like to contact us about new writing please write to us info@thenewtheatre@gmail.com