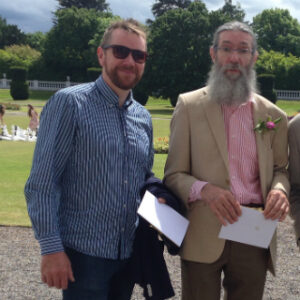 It is with great sadness that we learned of the sudden death of Robert Lane who designed and directed the first four plays staged at The New Theatre.
In 1997, Anthony Fox asked Robert to design the theatre’s first stage in a space behind Connolly Books. Along with a dedicated team of actors, designers and technicians, they created The New Theatre and “Joyriders”, directed and designed by Robert Lane opened in June 1997.

The Rasherhouse:
“..It’s directed and designed with harsh intensity by Robert Lane, and the performances throughout are chillingly talented.” – Emer O’Kelly, Sunday Independent, 26th October 1997

The Country Boy:
“Robert Lane, Director and designer, recreates the atmosphere of the play’s past glories, and delivers a winner once again.”
– Gerry Colgan, The Irish Times,
May 1998

Of Mice and Men:
“…credit for the integrity and visionary cohesion of the piece must go to director Tim McDonnell in a splendid set by Robert Lane.”
– Emer O’Kelly, Independent, 12th August 2001