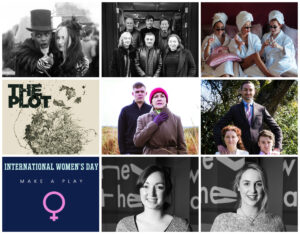 We’ve kicked off the new year with a slew of fantastic new writing shows.
Starting 2019 with RAVEN & THE CRONE by Nicole Rourke, Raven & Deirdre Molloy as part of First Fortnight Festival and a rehearsed public reading of 24 HOURS FROM TULSK by Michael
O’Sullivan.

In February we enjoyed the glittery DISCONNECTED by Ali Hardiman, and Paula Lonergan’s ghostly THE PLOT.

We swam into March on THE TIDE by Tara Maria Lovett and welcomed back Jane McCarthy’s THE HARVEST, which is about to set sail on a national tour including The Lyric Theatre Belfast.

We saw INTERNATIONAL WOMEN’S DAY MAKE A PLAY led by Jennifer Meade where Caitriona Daly, Nadine Flynn, and Aisling O’Mara presented their freshly baked play written in a single day – you can’t get writing any newer than that.

On the note of fresh starts, we are sad to say farewell to both Jane McCarthy (New Writing Coordinator) and Clara Purcell (Marketing Manager) as they move on to pastures new. We wish them every success in their future endeavours, both together as WitchWork Theatre Company, and seperately.

BECOME A FRIEND and help us support new Irish writers and writers based in Ireland.