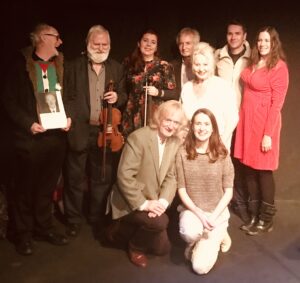 In 2019 we staged and supported numerous new plays with our regular play readings, our New Writing Week, New Theatre productions, hosting and co-productions. We were delighted to kick off the year with The Raven And The Crone as part of First Fortnight. We saw out January with the spectacle of Ali Hardiman’s Disconnected.

In February we saw The Plot by Paula Lonergan and The Tide by Tara Maria Lovett take to our stage.Our New Writing production of Jane McCarthy’s The Harvest made a welcome return in March together with WitchWork theatre company, before embarking on a National tour in April. This was followed by International Women’s Day Make A Play in aid of Saoirse Women’s Refuge in which Caitriona Daly, Nadine Flynn, Aisling O’Mara wrote separate sections of a play in just a day, that was then performed as a rehearsed reading. We also enjoyed Honor Heffernan and Trevor Knight’s musical extravaganza, The Whistling Girl, based on the work of Dorothy Parker, as well as the popular Boy Child by Dagogo Hart and Felicia Olusanya.

In April, I SEE YOU by Amy De Bhrún also returned by popular demand and we played host to the Irish premiere of Stewart Roche’s The Fetch Wilson. Arachnophilia by Aidan Fitzmaurice, another of our New Writing texts, was staged in full production, followed by excerpts of Edna O’Brien’s Girls In Their Married Bliss. In May, Daniel Reardon’s one-man show, Fond Pageant, took to the stage, the annual James Connolly Festival  returned, Tom Moran’s “heart wrenching” The Belly Button Girl made us laugh, Enigma Theatre’s Good Love by Karolina Szemerda brought us a modern take on the work of Strindberg, and Annie Keegan’s Gonne took us through the life of Maud Gonne.

June began with Idir Mná bringing Elizabeth Moynihan’s Quicksand to the stage for the first time. We played host to Bloominauschwitz by Richard Fredman, and Flying Turtle Productions’ annual presentation series.
In July we presented John Connors’ Ireland’s Call (developed as part of Show In a Bag), and the Irish premiere of Liam Williams’ Travesty together with Corps Ensemble.
Restless Ecstasy’s Skin Tight by Gary Henderson ran in August, as well as An Evening with Great Irish Writers by Neil O’Shea, and finally another new play production Intercession: Brighton Court by Owen Jerome Ryan.

The Autumn kicked off with the flurry of activity surrounding the Dublin Fringe Festival bringing another crop of exciting new shows to our stage. The New Theatre, Passion Pit Theatre in association with Amos Trust, Hodder & Stoughton & Dublin Theatre Festival followed close on its heels with Justin Butcher’s Walking To Jerusalem. We presented A One and One: Two plays about contemporary social issues with UnCut Diamond Players, and Michael Collins’ It’s A Cultural Thing with Traveller Wagon Wheel. Soul Seers – an Irish Anthology of Celtic Shamanism brought us an evening of Celtic music, art and stories. Sheehy Skeffington: Reminiscences Of An Irish Suffragette by Rosalind Scanlon came to us from the Irish Repertory Theatre Company UK.

November began with our annual New Writing Week – Path To The Stage, featuring Driving Me Crazy by Ella Skolimowski, A Season of Arrival by David Halpin, Black Is The Colour by Tara Maria Lovett, PUP by Myrn Devaney, Long Way Down by Oisin Robbins, and Eating The City by Jody O’Neill. We hosted music and embroidery workshops together with the Ireland-Palestine Solidarity Campaign. It ended with Landmark and Keynote’s “visceral and violent” production of Blood In The Dirt by Rory Gleeson.

Most recently AboutFACE Ireland transformed our stage into a sound studio in their acclaimed and popular production of the seasonal Orson Welles’ Christmas Carol. We rang out the year with our own fundraising musical evening featuring the wonderful Noel O’Grady and special guests (pictured above)

Special thanks to our artists, patrons and Friends of The New Theatre. Thanks to our funders – The Arts Council, Dublin City of Literature UNESCO & Dublin City Council Social Inclusion Department and private funders.

We’re looking forward to all the exciting new productions we’ll bring you next year. Season’s greetings and we can’t wait to welcome you to The New Theatre.