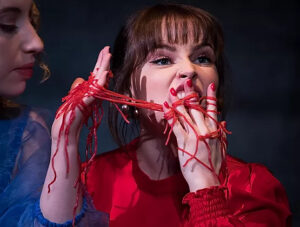 B(l)oom, “the debut presentation by an ambitious new collective, tasteinyourmouth”, enjoyed a sold-out run at The New Theatre recently.
The young company staged an ambitious and well-received production by audiences and critics alike.

“Describing the imagined destruction of Dublin in near apocalyptic terms, the title serves as a double sided metaphor, proclaiming boom as both growth and destruction, and a blooming at the same time.”

“Dunleavy’s script deals in repeated motifs, cleverly observed banalities, and a litany of descriptive details, several surreal in nature. The whole achieving something of a neat circularity… a wonderful feel for the rhythmic interplay between words and sentences.”

“What makes “b(l)oom” work are a hugely engaging Laoise Murray and Heather O’Sullivan. Their chemistry bringing a wealth of comic subtlety and richness which Morgan supports with aplomb“

“understated Murray, who nails it perfectly with a pared back expressiveness, while also showing some impressive range“

“a sublime O’Sullivan to delight as the more recognisibly [sic] funny one, which O’Sullivan handles with captivating quirkiness. Revealing layers of detail with each expression and gesture, O’Sullivan proves magnetic and irresistible.”

Showing heart, talent, and some serious promise, along with two engaging performances,… Suggesting the [sic] if tasteinyourmouth aren’t ready to take the world by storm just yet, you wouldn’t bet against them doing so in the future.”