Dragon is a hit 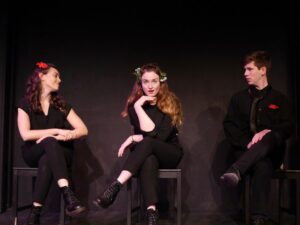 Fizz & Chips Theatre enjoyed an audience and box office hit recently with their new musical, Dragon
Below are some examples of the lovely reviews they received for the production

Congratulations to this young emerging company.

“Both modern day and fantasy scenes are skilfully choreographed and the cast showcase their musical and dramatic versatility in quicksilver switches between these two parallel worlds. The realistic side of the play is built around a lively repertoire of songs that display the authors’ wit and serve the performers’ vocal range through frothy pop, power ballad and even touches of hip hop. “

“… many amusing numbers that parse the dramatic scenes in this piece and they are all well served by the performers’ talent as solo and harmony singers.”

“From Hamilton to Hollywood, Fizz and Chips know their stuff, having an strong understanding of how to structure a musical.”