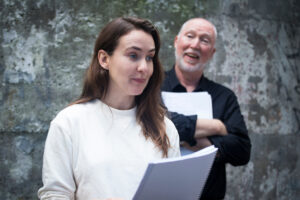 ‘The New Theatre Dublin has, incredibly, found a way to bring its new production of Jackie to expectant audiences despite current restrictions: the company will stage the show outdoors, at the Yeats Memorial in St Stephen’s Green, to ensure that patrons can safely attend.’

‘Amy O’Dwyer, who plays the eponymous protagonist Jackie, says that the show faced a number obstacles on the road to performance. “It’s been postponed a few times – it was due to start in March, then we were due to open on Tuesday [September 22nd] but the new restrictions came in, so now we’re staging it outside with the help of the OPW [Office of Public Works], who allowed us to use the Yeats Memorial.”’

‘O’Dwyer describes the show as a “fantastic piece to be part of” and says it was great to have the playwright Gerard Humphreys in the room so that the team could shape the play to their vision and “go hard on the editing” with his permission.’

Now that the show will be staged outside, it faces some unique challenges. O’Dwyer has never performed outside before and is both excited and worried about some of the specifics: “My biggest thought has always been how I can show the growth of a character across time and performing outdoors requires a completely different type of acting. Small gestures and subtle cues might get lost.”

Beyond that, there are also practical concerns. “The rain and wind is a big worry, and projection is another. The sound might get lost if the weather is bad”, O’Dwyer says. As such, she advises all prospective audience members that “it’s worth bringing a blanket and cushion to make sure you’re comfortable, and dress for the elements since it might rain!”

“I believe that theatre can change thoughts and make people think”, O’Dwyer adds, “the audience will definitely come away having learned something new”.

Jackie runs in the Yeats Memorial at St Stephen’s Green from September 29th until October 10th.