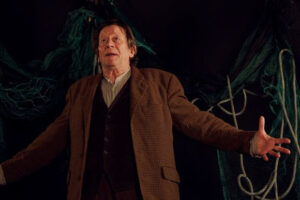 Joe O’Byrne’s “The Aran Islands” is a one-man play assembled by him from turn-of-the-century journal entries by J.M. Synge, the author of “The Playboy of the Western World.” It’s the 10th video production of New York’s Irish Repertory Theatre, whose shows continue to set the gold standard for theatrical webcasting.”
– THE WALL STREET JOURNAL

Performed by Brendan Conroy, directed by Mr. O’Byrne and filmed earlier this year at Dublin’s New Theatre.
It is a digital remount of the Irish Rep’s original 2017 production, a piece of richly colored storytelling enhanced this time by film footage shot on the isolated islands portrayed in the play.

Synge’s subject was the everyday lives of the island’s fishermen and their families, who were nominally Catholic but still inclined to touches of good old-fashioned paganism, as the legends recounted in the play reveal: “When Lucifer saw himself in the glass, he thought himself equal with God. Then the Lord threw him out of Heaven, and all the angels that belonged to him. While He was ‘chucking them out,’ an archangel asked Him to spare some of them, and those that were falling are in the air still, and have power to wreck ships, and to work evil in the world.”