The Tailor and Ansty

The Tailor and Ansty by Eric Cross was first published as a book in 1942 and banned in Ireland shortly afterwards. The banning, on the grounds of alleged indecency and obscenity, was to lay bare once again the absurdity that was Irish censorship. In the ensuing four-day debate in The Senate, one Senator, who claimed to have read all authors “from Rabelais down”, said he had never read a “finer collection of smut”.

The Tailor, Timothy Buckley,(Ronan Wilmot) was a great seanchi (storyteller) and he and his wife Ansty (Ena May) used to hold court in their cottage near Gougane Barra in West Cork, welcoming all to their fireside. The Tailor never travelled further than Scotland, yet the breadth of the world could not contain the wealth of his humour and fantasy. His stories on marriages, inquests, matchmaking, wakes and their black cow were told to a nightly packed cottage.

The subsequent banning of the book led to the Tailor and Ansty being visited by three of the local clergy, who forced him to burn his copy of the book in his own fireplace. Tragically the couple were then ostracised by some of their own community. Many of the tailor’s stories reflected his own love of nature and had a raw vitality, humour and sexuality out of step with the mores of the time. The Tailor, Timothy Buckley (1860-1945) and his wife, Ansty (died 1947), are buried in the small graveyard by the lake in the beautiful valley of Gougane Barra, West Cork.
When the ban was lifted in 1963, Cross’s novel about their life was adapted for stage by P.J. O’Connor and was first performed in The Peacock Theatre, Dublin in 1967 with great seanchai Eamon Kelly and Bríd Lynch in the title roles. On the death of Bríd, Eamon’s wife Maura O’Sullivan played Ansty. This latest production by The New Theatre played for three highly successful summer seasons at Gougane Barra in 2005/6,/8 followed By its UK premiere at THE OLD RED LION ISLINGTON,LONDON in the summer of 2008 for 4 weeks. It had a successful run at Fota House, Cork last summer. 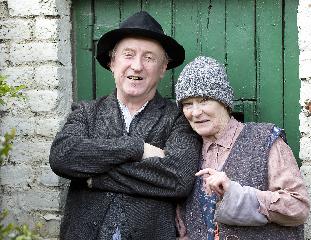