At the heart of Charles Darwin’s Origin of Species is the theory of natural selection: the process by which life accumulates random genetic changes resulting in the survival of the fittest. But what happens when there has been decay in values at the heart of the American Dream?

In No Country for Old Men Cormac McCarthy described Texas as a place that was able to soak up cruelty and dish it back at the same time. This was never truer than in Killer Joe, the first play written by Pulitzer Prize winner and Steppenwolf actor, Tracy Letts. The play focuses on the Smith family, a selfish, dysfunctional clan of trailer-trash Texans who hatch a plan to get themselves out of financial ruin. However, when you put a snake down a rabbit hole, only disastrous consequences can follow. More a force of nature than a human being, once Killer Joe Cooper enters their world, things are never as easy as they seem and in the grand tradition of film noir, events spiral relentlessly towards an inevitable ruthless finale.

Killer Joe is a pitch black comedy which subverts family values in a way which scrapes the darker depths of the human soul. Martin McDonagh has credited this play as the one which inspired him to revise his writing style and ultimately lead to worldwide acclaim. 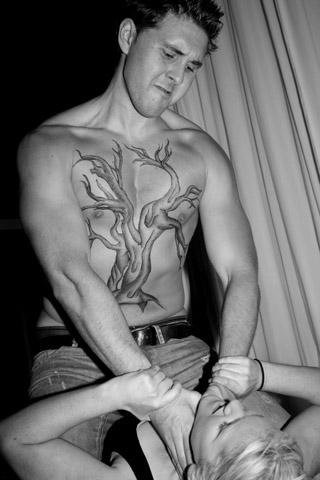 This production features graphic violence and adult content and is recommended for mature audiences only.