Three Short Plays:Lennon v McCartney / The Wire on O’Connell Street / Keep The Devil Way Down In The Hole

Home  /  Theatre   /   Three Short Plays:Lennon v McCartney / The Wire on O’Connell Street / Keep The Devil Way Down In The Hole
Back to events

Since the dawn of time human beings have gathered in pubs and argued about who is greater – John Lennon or Paul McCartney. Now, finally, here at last (and not a moment too soon), is a short play that definitively sorts out the argument once and for all. Well. sort of. Lennon v McCartney is performed by Seamus Brennan and Gus McDonagh. This short play has been selected for performance at the 2010 Beatles Festival in Liverpool next August.

The Wire On O’Connell Street

Have you ever wondered what might have happened if the greatest TV show of all time (The Wire) had been set in Dublin, Ireland? No. Well, don’t worry; not many people have. Still. here it is. The Wire on O’Connell Street. Good against Evil. Tall against Small. Westside against Eastside. Hey, it’s all in the game. So get ready to play or be played. You feel me? The Wire on O’Connell Street is performed by Sean Flanagan, Kevin McGahern, Trevor Browne, Enda Muldoon and Barra O’Duill.

Keep The Devil Way Down In The Hole

was founded in 2008 to fight crime and keep young hoodlums off the mean streets of Dublin. Having failed hopelessly on both fronts, we then turned our attention to putting on plays instead. Our previous show – Sex! (Three Short Plays with very little to do with sex) – was presented at the New Theatre in late 2008, and it would have no doubt won a bucket-full of Tony Awards if we had been sleeping with the right people … or any people. 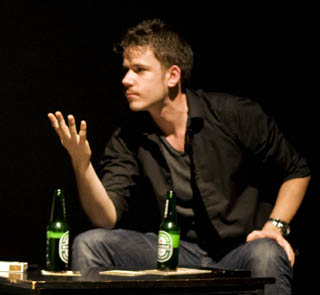 Written and Directed by Stephen Kennedy

There is no interval.