Mon 3rd May to Sat 8th May at 6:45 pm (Sat Matinee at 1 pm)
IRISH PREMIERE.
UK based Gay Actor/Writer John Martin Stevens brings his new play TWO LOVES to Dublin for the very first time. The play takes its theme from Shakespeare’s Sonnets and promises to be a heady cocktail of passion, obsession and sexuality, as it explores a love triangle between a poet, a male youth and the poet’s mistress. A poet invites a young man to spend the summer with him and his Mistress to help in the boy’s ‘education’. It soon becomes clear however that they have very different interpretations of the word education. A game of cat and mouse is played, but do we really know the identity of the mouse? “Some people find it hard to understand that one of the most popular poems in the English languauge “Shall I compare thee to a summer’s day” was written by a man to a male youth” remarks John the playwright. Sonnet in Italian means song and John has incorporated music into the plot and because of his love of the American Song Book, all the songs are either Ella Fitzgerald or Billy Holiday tracks.

Mon 3rd May to Sat 8th May at 8 pm (Sat Matinee at 2:30 pm)
The IRISH PREMIERE of the Award Winning Comedy Drama MOTHER/SON sees Jeffrey Solomon triumph in this semi-autobiological tour-de-force. His show may have been about a young Jewish man coming out, but the real thrust of the play – and what makes it such a memorable piece of drama – is its emphasis on how his mother coped with the situation. In a series of brilliantly performed monologues, Solomon alternating between Bradley and his mother, Mandy, as they talked, sometimes argued – usually on long-distance phone calls – about his gay lifetsyle, his boyfriends, and her own feelings in coming to terms with his sexuality. Written and performed by Solomon, MOTHER/SON was inspired by his mother’s support for him when he himself came out in 1990. It is a finely wrought celebration of a mother’s love for her son and the lengths she will go in order to stand up for him and against unthinking prejudice.
MOTHER /SON is a MUST SEE! ***** 5 Stars from Scotsgay who wrote “Brilliant Comedy … Packs an emotional punch that will knock you from here to the end of the festival … I dare you to watch it and leave with dry eyes!”

Mon 3rd May to Sat 8th MAY at 9:30 pm (Sat Matinee at 4 pm)
The EUROPEAN PREMIERE of Whore Works is brought to Ireland courtesy of New York’s Sugar Valley Theatricals and Creative Concepts Productions who are both committed to the exploration of sexuality in the lives of same gender loving men of colour. “This is my first time doing this …” “I’ve never paid anyone for sex before …” Whoring is hard work. And now the competition is getting stiffer by the day with the influx of the newly jobless. Whore Works takes a sharp, witty, hilarious, thought provoking, balls-out look at a black hooker’s day-to-night struggle with hating and sometimes loving men who are paying him to, well … you know. After spending two years researching, young playwright Juan Michael Porter II plays a dancer-cum-hustler, across from seasoned New York actor Bryan Webster, who plays a variety of rich older johns who hire Porter – from an aging record mogul in a hip-hop tracksuit to a manic porn-obsessed sicko with handcuffs to, well, one nice guy who falls in love with Porter and asks to see him exclusively, and not necessary for cash. Will true love ever be found?
Contains Nudity and Strong Language. Not Suitable For Persons Under 16 Years. 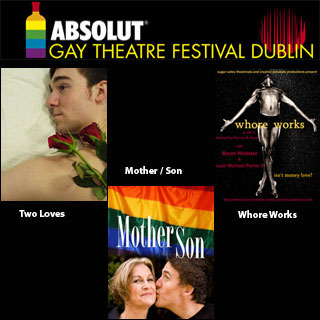