Mon 10th May to Sat 15th May at 6:45 pm (Sat Matinee at 1 pm)
WORLD PREMIERE by Elizabeth Moynihan, Zebbie Award Winner 2009 Irish Playwrights and Screen-Writers Guild of Ireland for Best New Radio for The Cider Queens. Bartie is the only butcher in the town of Swan. Bartie’s son Canais arrives home unannounced from Australia after an absence of ten years. Cepta, his twin sister, has had a career change and a spell in prison for unlawful sex with a minor, Rose, her student. It’s the eve of Mammy’s birthday and she has not returned from her pilgrimage to Loch Derg. Family drama overflows amidst cake and celebrations, with long-held recriminations, accusations and resentments rising to the surface. Elizabeth Moynihan is an exciting new writer to watch and after her success at the 2009 Absolut Gay Theatre Festival with Walnuts Remind Me Of My Mother, she returns with another incisive view of family dusfunction in rural Ireland.

Mon 10th May to Sat 15th May at 8 pm (Sat Matinee at 2:30 pm)
The IRISH PREMIERE of Weepie is a startling blend of the savage and the sublime. While this might sound gloomy, the play is not… much of it is hilarious. In November 1994, two nineteen year old, upper middle class students Richard Elsey and Jamie Petrolini were sentenced to life imprisonment for the murder of Mohammed el-Sayed. The victim had been stabbed 16 times in an attack which began as he waited in his car at traffic lights. There was no obvious reason for the murder. The victim was unknown to the perpetrators and there was no racial motive. The killing destabilised notions of respectability and bewildered public and media alike. In an audacious mix of tense drama and hilarious comedy, Weepie addresses that bewilderment, pulling apart youthful notions of masculinity in a heady mix of absurd ritual, eroticism, magic realism and hard-hitting drama.
Contains Nudity and Strong Language. Not Suitable For Persons Under 16 Years.

Mon 10th May to Sat 15th May at 9:30 pm (Sat Matinee at 4 pm)
This WORLD PREMIERE from the Artscape New Writing Programme, SOUTH AFRICA, tells the story of two gay couples – one male gay and one female gay. One from each team have a fol de rol by mistake and the result is a pregnancy, a child, and high comic chaos as four very sexy and delightful young gay people, whose last thought in life is ‘children’ …… take on their responsibilities amid high camp and down-to-earth coping. The play is crazy and funny, filled with warmth and a powerful sense of loving.
Contains Nudity and Strong Language. Not Suitable For Persons Under 16 Years. 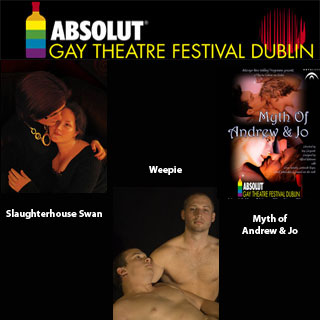