The Authors and Directors from left to right: Yvonne Ussher, Róisin Coyle, Arthur Sheridan, Anthony Fox
After the highly successful inaugural New Writing Week in August 2009, The New Theatre is delighted to present two new plays by two exciting writers, Róisín Coyle and Arthur Sheridan as part of a week celebrating new Irish writing for the stage. This season of new writing is part of what will be a regular fixture on The New Theatre calendar. They hope to host at least three seasons of new writing each year, nurturing emerging talent in this wonderful intimate space

There’s a reason for everything. Well, maybe there’s not but it’s worth a try. It passes the time and postpones the guilt.
Adam wants to understand his torturous relationship that didn’t work out. He enlists the help of Helen, his former lover to re-enact their past.
Can their relationship be explained by Chaos Theory? Join them on the edges of reality as they Examine, Analyse, Understand and Accept.
This dark comedy edges on the real and surreal, human being and human mechanics as they dissect the destruction of their relationship.

About Róisín Coyle
Róisín has been working in theatre since completing her MA in Modern Drama in UCD. While she was living in London, she was awarded a place on the Royal Court’s Young Writers’ Programme, after submitting an early draft of Chaos Theory. Last November, she directed a reading of two of her plays, Chaos Theory and Wake for The New Theatre. She has recently been accepted onto the New Playwrights Programme at the Abbey Theatre.
About Yvonne Ussher
Yvonne Ussher is the Artistic Director of Idir Mná – a new theatre company that celebrates women in theatre. Idir Mná heralded much success (2 sell out runs) with their inaugural production of an all female(ish) Glengarry Glen Ross. Yvonne has been celebrating women in theatre in her own way with production work on Those Powerful Machines (The Attic Studio), Some Explicit Polaroids (Golightly), Babylon Heights (The Attic Studio) and Twelfth Night (Natural Shocks). She has also acted in The Dress (Stoney Road), The Shadow of a Gunman (The New Theatre), The Tailor & Ansty (The New Theatre), The Hostage (The New Theatre) to name but a few. Yvonne is delighted to be back in the director’s seat having previously enjoyed the role when she directed Mike Poblete’s harrowing Antenora for The Attic Studio.
Cast: Dearbhail Carr, Emmett Hughes, Crissy O’Donovan, Conor O’Riordan

Fifteen-year-old Ann blames her foster parents on the woes in her life and hides behind a security blanket of narcotics. In Ann’s dream world she gains comfort from an insect that hangs from the ceiling spinning her a web of security.
Meet her father, a raging alcholic blamer, and her brother who has come through the mire. Spider is a journey through dysfunctionality peppered with fits of dark humour which blinds a mad Irish family.

About Arthur Sheridan
50 Year old Arthur Sheridan has been writing since he was 33. He won the Miramax award in 1996 after completing a screen writing course at UCD’s script writing summer school. He then went on to complete a MA in screenwriting at The National Film School in Dun Laoghaire where he also got a BA in directing film. Spider is his first play and is based on two short stories written in 1995, one of which won The Drogheda/Amergin Short Story Competition. He is well known in the Finglas and Ballymun area for his comedy poetry and did comedy improve in The Ha’penny Bridge Inn for 6 years. He was also a finalist in The Bard of Armagh Festival. Arthur has just begun development on a screenplay with Anthony Fox of Foxglove Films.

About Anthony Fox
Anthony Fox is a native of Cavan and studied in The Lee Strasberg Studio, Holborn, London. As an actor he has worked in London and New York. In 1997 he founded The New Theatre. He has acted and produced many theatre productions including John Steinbeck’s Of Mice and Men directed by Tim Mc Donnell (Best production – Sunday Tribune) and the sell out show Brendan Behan’s The Hostage directed by Ronan Wilmot. Anthony also wrote and starred in the feature Anton www.antonthemovie.com which won three Irish Film and Television Award nominations and sold worldwide. It is directed by Graham Cantwell and co-produced by Patrick Clarke. The New Writing season is something Anthony feels is very important to The New Theatre. 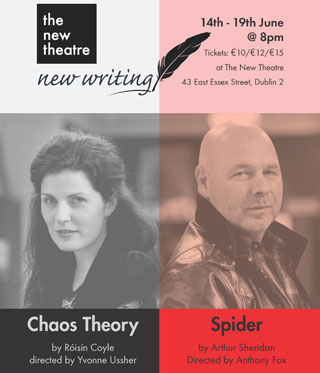