The Quare Fellow On Tour

Photo: Daniel Farson, who came to Dublin in the 1950’s to spend a week in Brendan Behan’s company.
On 19th November 1954 in a tiny mews theatre in Herbert Lane, Dublin there took place the opening night of a new play that was to establish the writer as a world famous playwright and subsequently a media celebrity, before that phenomenon was invented – The Pike Theatre Club and Brendan Behan had come together.
56 years after its first performance in the 50 seater Pike Theatre, The New Theatre: Dublin (66 seater) will honour the spirit of Brendan Behan, Alan Simpson and Carolyn Swift (founders of The Pike) by once again staging a huge theatrical work in a small intimate space.

The play is set in Mountjoy Jail on the day and night before the unnamed Quare Fellow is to be hanged for murdering his brother. Brendan Behan had spent time in the same jail for his IRA activities.

The play had a huge impact on its premiere at The Pike Theatre but Ireland of the 1950s was not ready or mature enough to embrace a working class Republican playwright writing about hanging, which was still a judicial sentence in Ireland at that time. Alan Simpson and Carolyn Swift were unable to transfer the show to one of the bigger Dublin theatres and it was not until Joan Littlewood directed the show in 1956 in her theatre, The Theatre Royal, Stratford East, London and the critical reaction from the English press and its subsequent transfer to the West End for a six month run, that Ireland and the world woke up to the genius of Brendan Behan.
Kenneth Tynan, the famous theatre critic with The Observer wrote “it seems to be Ireland’s function every twenty years or so, to provide a playwright who will kick English Drama from the past into the present, Brendan Behan may well fill the place vacated by Sean O’Casey.”
So now The New Theatre, Dublin pays homage to all those courageous and innovative people at The Pike Theatre by re-looking at and re-energising this huge canvas which is The Quare Fellow. 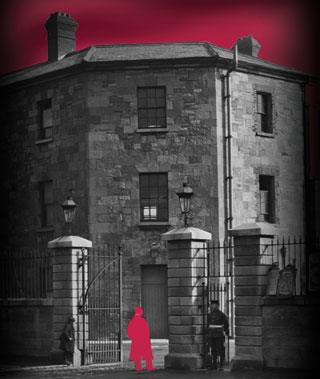