HOWYA ( A One Woman Comedy)

“It’s gone a ridiculous country altogether. If it keeps goin the way it’s goin you won’t be able to fart for fear the guards’ll lock ya up for makin noise”

When Micheal Martin, Ireland’s Minister for Health introduced a ban on smoking in public places in March 2004 he started a debate that turned father against son and brother against brother. In pubs all over the country non smokers cheered in the new clean air legislation and shouted their approval as marginalized smokers were forced onto the street or into hastily built lean-tos. Smokers in turn rounded on non smokers and legislators, predicting an end to the pub culture of the country and vilifying “nanny state” politics.

Scandal knows no bounds as seven women gossip intermittently in the smoking room of a Dublin pub, leaking personal information as they go. As the innocent along with the guilty suffer the stings of innuendo and the lashes of sharp tongues a hilarious tale of a crime and its consequences unfolds.

Mary has also worked with RTE radio on plays including Lennon’s Guitar, The Sorting Office Of The Universe, Bog Boy, Appearances, Moving Day and Happy Hour. She narrated Can Lilly O’ Shea Come Out To Play for The Book On One.

Other radio drama includes Dublin Tenement Life for Dublin History Museum and The Lost Patriot for Tin Pot Productions. She also performed the role of Freja in the feature length cartoon Thor – The Edda Chronicles for Magma Films.

Mary is a multi award winning singer and the director of Visions Drama School. 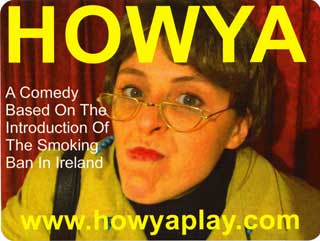