To listen to clips from the show, click on these links:

‘He came into my life in February 1932 and never left it again. It was two days after my sixteenth birthday at three o’clock in the afternoon on a grey, dark German winter’s day.’
So opens Fred Uhlman’s gripping story of two sixteen year old boys and their time together at Karl Alexander Gymnasium in Stuttgart, Wuttemberg’s most famous Grammar School, as the clouds of Nazism gather on the horizon.

Daniel Reardon will tell his story of being that sixteen year old Jewish boy who left Germany as those terrifying clouds of Fascism were gathering. A very special story.

About Fred Uhlman
He was born in Stuttgart in 1901 and, as an anti-Nazi lawyer, was forced to leave in 1933 for England, where he became a well-known painter.
Director: Ronan Wilmot. Set Design: Lisa Krugel. Lighting Design: Zia Holly. Costume Design: Aislinn Lawlor 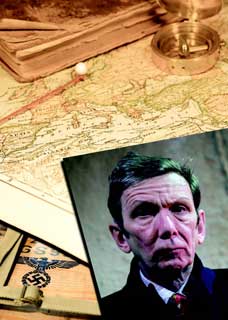