Men are from Stoneybatter, Women from Phibsboro

Home  /  Theatre   /   Men are from Stoneybatter, Women from Phibsboro
Back to events

Witness the most powerful love story in modern times – this comedy will take you on a journey through the early stages of Kate and Fionn’s relationship, from meeting each other’s mates to the introduction of Kate’s slightly unorthodox parents. Fionn is a man very unlucky in love but not to fear, he has his friends: Donal, the self acclaimed greatest Cork mind since Bill O’Herlihy and Steve, the man who could give Dr. Phil a run for his money. In Kate’s corner she has Amy, a girl who wanted to be a nun but unfortunately was a bit too loose for the job. Then there’s the all talk but little action confrontational Dee. And last but not least there’s Fran. You’d want to keep an eye on Fran. All is not what it seems!!!

So to recap: we have the girl, the boy, the slightly odd friends and the token odd parents which adds nicely to the mayhem.
Cue side splitting laughter (hopefully) and you’re in for a treat. 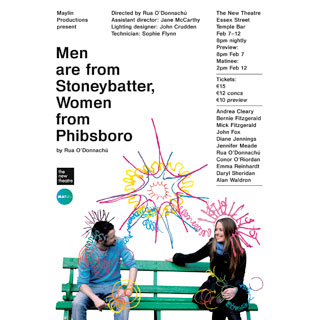