L to R: Marcus Lamb, Adam Traynor
Click is a witty yet poignant story of two lifelong friends trying to survive.
As they wait for rescue talk turns to life, love, limbs, why Pauly’s wife cheated on him, how Jacko discovered his ex-girlfriend’s little secret and what it means to be a modern man. As the hours pass not only are their lives in jeopardy but so is their friendship as buried secrets threaten to destroy everything.

About Adam Traynor
Adam graduated with a Honors BA in Drama from the DIT Conservatory of Music and Drama. He has worked in the areas of Theatre, Film and Television. His previous Theatre roles include: John Proctor “The Crucible”2010(Grangegorman), Liam “Orphans”(Focus)2011 “Hearing Voices”(Civic)2008, “Euripides Must Die”(DIT)2009 and “Tough Guys”(Civic)2007). His Film and Television roles include: Ceart agus Coir(TG4)2011, The Promised Land(2011), Jay and Jacinta(2008), A Fistful of Diamonds(2010) and Mommy’s Boys(2010) 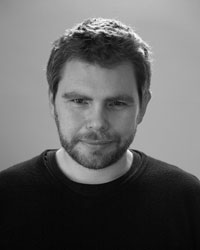