One for Sorrow / Bad Sunday

The productions, directed by Bairbre Ni Chaoimh, are presented by the Graduating Students of Drama, of Technical Theatre and of Costume Design from Inchicore College of Further Education.
Bairbre is a freelance actor and director and she directed lasy year’s graduates’ Irish premiere of Marius von Mayenburg’s THE STONE.

Among her many credits as director, Bairbre has worked as an Associate Artist at the Abbey Theatre and as Artistic Director of Calypso Productions, receiving an Irish Times Theatre Award, a MAMA award and a World Refugee Day award.

One For Sorrow by Mary Kelly and Noni Stapleton
Doreen, a young woman playing catch-up on life, finally freed from the clutches of her small town family, moves to Dublin. Expectations are rampant and grievances raw. She encounters a myriad of characters and ghosts from the past, ranging from the wildly humorous to the absurdly familiar.
Mary Kelly and Noni Stapleton, founders of Skipalong Theatre Company, co-wrote and produced One for Sorrow and its sequel Two for a Girl.

Bad Sunday by Mark Wale
Think Commedia dell’Arte, think Marx Brothers, think Ariane Mnouchkine, think Steven Berkoff, think Warner Brothers cartoons. If you can. If you can’t, don’t think at all.
Mark Wale studied mime with Etienne Decroux in Paris and film at CECC in Barcelona. Bad Sunday was written for The Little Sisters of Tragedy. The play received a Society of Irish Playwrights O. Z. Whitehead award in 1999. 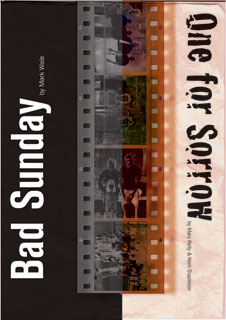