No Irish, No Blacks, No Dogs

No Irish No Blacks No Dogs by Maria Ann Hylton is set in 1981, South London and spans across a year against the backdrop of Thatcherism, ‘suss laws’, the Brixton Riots, an IRA bombing campaign, the Yorkshire Ripper being captured, and a royal wedding. Four people – Silk, Tommy, Sandra and Sidney are the focus of No Irish No Blacks No Dogs. All of them living on the fringe of society that is itself in disarray. As they strive to carve out a new life for themselves and leave their mixed pasts behind them, being in love only complicates matters.
Written by Maria Ann Hylton Directed by Shane Gately Produced by Liam Moran & Maria Ann Hylton Featuring Laragh Cullen, Stephen Jones, Donna Anita Nikolaisen, Paul Nolan

About Morton Films and Media
Liam Moran and Maria Ann Hylton set up Morton Films & Media, which aims to develop and produce independent feature films/shorts and contemporary plays. Amongst their credits: ‘The Couple’, a short film which was shortlisted for the Jameson Best Irish Short Film Award at the 2005 Cork Film Festival, ‘Bittersweet’ a short film featuring Art Kearns and Ian McElhinney which will have its permiere screening at Screen Cinema in Dublin this May. They are executive producers on the feature ‘8.5 Hours’, which was screened at Cannes Film Festival Marche Du Film 09. For theatre: ‘Conditioned’ which was originally chosen as part of ‘The Playground’ theatre readings at the Axis, Ballymun in 2007. This premiered at the infamous International Bar in Dublin of the same year. It was staged once again at the Axis Arts Centre in November 09. It is a tough contemporary drama about life in a woman’s remand prison. 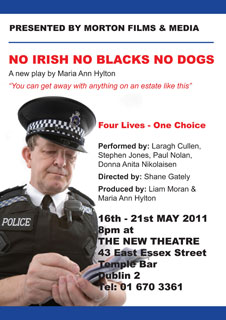