Directed by John Dunne.
The Blasket Islands are situated off the coast of Kerry. It is the late 1930’s and the Islands are slowly dying. Most of its inhabitants have left to live on the mainland. Peadar and Maire 0′ Shea and their son, Christie, are also planning to leave. It is not a decision they have come by lightly. So on their last day on the Island they share their thoughts and fears of what is before them and more importantly, what must be left. We also meet their daughter, Bridie, who has already left and now lives on the mainland. But her views on Island life are somewhat different from that of her family.

About Mary Hoey
Mary Hoey hails from Omeath on the shores or Carlingford Lough. Drawing her inspiration from the landscape of the Cooley peninsular, her award winning plays reflects the language of people drawn from a past time of innocence, hardship and laughter. Mary’s writing also includes a deft comic touch and her many one-act plays reflect the lyrical simplicity of everyday situations.

About John Dunne
John Dunne is a writer, director and producer with a number of credits to his name. His directing credits include On Raglan Road (aka Kavanagh) by Tom O’Brien, Quare Times by Peter Hammond, Allegiance by Mary Kenny and a raft of new plays by new Irish writers. As artistic director of award winning London Irish Theatre, John is able to give voice to London Irish writers and actors and is able to explore the Irish diaspora from that particular angle. As a writer John has penned a trilogy of Irish plays consisting of Famine, 1916 and Belfast and has also adapted Liam O’Flaherty’s Informer for the London stage. 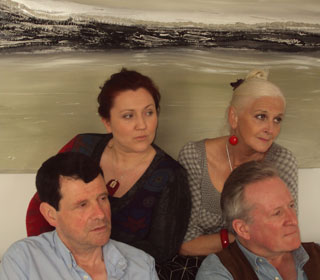