Produced by Idir Mná in support of Justice for Magdalenes.

A story about bad girls trying to be good – a world where it seemed inevitable that Doris Day should become the patron saint of all that is wholesome and perfect and feminine.
Charlotte Jones was inspired to write this after reading “A Miss Kitson and a Miss Baker were placed in a Hospital for the Criminally Insane in the 1920’s for bearing illegitimate children and not released until the 1970’s.” Set in St. Dymphna’s hospital for the criminally insane, our two lead characters save one another in a beautiful, heart-warming story.
The show will be reproduced as a fundraising tool for Justice for Magdalenes.

About Justice for Magdalenes:
Justice for Magdalenes seeks to promote and represent the interests of the Magdalene Women, to respectfully promote equality and seek justice for the women formerly incarcerated in Magdalene Laundries and to seek the establishment and improvements of support as well as advisory and integration services provided for survivors. The organisation is based in County Cavan and we operate three phone lines available to anyone in Ireland, the United States and United Kingdom. We also maintain a website at www.magdalenelaundries.com and an online group through Facebook open to academics, researchers, supporters and others with an interest in the Laundries.

About Idir Mná:
Yvonne Ussher (Those Powerful Machines, Antenora, Anton) artistic director of Idir Mná successfully produced an all female Glengarry Glenn Ross by David Mamet in The New Theatre in 2009 & 2010.
Idir Mná is name is Irish for “Amongst Women”. Artistic Director Yvonne clarifies that ‘before people think it is a lesbian feminist thing – it’s not! And it is not in any way a male bashing machine. Idir Mná aims to address the imbalance in our profession on the lack of decent female roles in a way that doesn’t involve women sitting around complaining about shoes, boys or periods.’
We believe our production will offer comfort to those affected by the Magdalene Laundries and offer an education to those who haven’t. 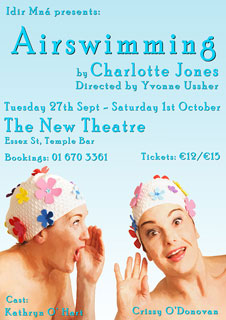