Since their last appearance at the New Theatre in March they have firmly established themselves on the festival circuit playing to sold-out audiences at the Paddy Laughs, The Flat Lakes and Castle Palooza to name but a few. They are regular contributors to Republic of Telly (RTE) and continue to be a YouTube sensation. Come and see what all the fuss is about.

Ghost Train Willy Sketch Group was formed in 2008 by five highly experienced Improvisers / Actors / Comedians / Writers, Danny Kehoe, Sharon Mannion, Lisa Garvey, Eoghan McLaughlin and Graeme Singleton. Their aim was to create fresh innovative comedy that would be presented in sketch format, both on film, and also live at comedy clubs and theatres throughout the country.

In short, Ghost Train Willy are one of the most exciting comedy acts to emerge in recent times. Their unique blend of fast paced original ideas and engaging larger than life characters make them a must see.

Ghost Train Willy are delighted to be debuting this show at The fabulous New Theatre
www.ghosttrainwilly.com 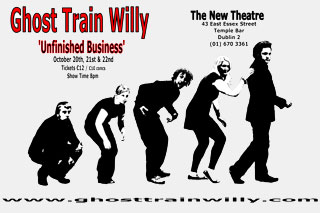