“The new writing initiative is planned as a regular event at the New Theatre and on the basis of these two plays, the theatre is clearly fostering talent and giving it room to develop. This is an important scheme and promises to be a showcase for emerging writers, actors and directors”. – Irish Theatre Magazine.

In 1997 The New Theatre first started reading plays by emerging or established playwrights with a cold audience made up of theatre goers and professionals working within the theatre sector.
Since then The New Theatre has hosted or produced over 50 new plays or adaptations.
This New Writing week consists of two staged playreadings per night.
To download the New Writing Programme click here.

A boy suffering from delusional disorder is tormented by the death of his mother. He has spent the majority of his life in psychiatric care; this care has shaped his life as much as the illness. He escapes with the intention of kidnapping a girl. His reason for the kidnap is not clear. He creates a world around him, a world with aggression, sadness and widely vivid delusions which become more aggressive and self destructive. Nothing can be taken on face value in the world of the Boy.

No Room For Angels by Arthur Sheridan

Eleven-year-old Johnny and his younger, brother, Timmy are neglected and abused by their mother. who eventually abandons them. Sadly, they end up in an orphanage run by Christian brothers. Forty-year-old Mrs. Sheridan lives close to Johnny, with her husband. She can’t have kids, and dotes on Johnny and Timmy. She invites them to her house as often as possible, and when they are abandoned, she agrees to foster them. But Johnny has run away from the orphanage.
Cast: Donal Haughey, Gail Fitzpatrick

John is having a bad night. Fact is, he’s been having a bad year. Pulling in extra shifts, staying late, in the office 24/7… But the work just keeps piling up and the job is getting tougher and tougher. And all the while that voice is telling him that maybe it’s him. Maybe he’s just not good enough.
Because, all of this wouldn’t be so bad if it weren’t for Frank. Frank-the face and name behind that voice. Frank, ever constant, always there. Watching on. Waiting.
But for all of John’s problems, if he let’s him and if he listens…Frank just might have a solution.

Karla who is unhappily married sophisticated women in her mid 40’s, who has taken her young lover Michael away for the weekend to her husband’s cottage. They are at logger’s head – constantly arguing with one another – Michael wants more from the relationship while Karla, who financially takes care of him is merely treating it as an affair. They are interrupted by a knock at the door – Michael answers it only to find a Stranger with a double barrel shot gun – he wants shelter from the raging storm outside. The Stranger tells the couple that he has been outside watching them for a few days and lets them know what he has seen, unbeknown to Michael – he in turn becomes is enraged at Karla’s deceitfulness and tries to take out his anger on the armed Stranger. There is another knock at the door this time it is Swampy, a young man who is the Stranger’s partner in crime. He is
dangerous psychotic who has returned from a botched ‘job’. Swampy proudly displays his misogyny and openly toys/teases Karla in front of the other men. The Stranger & Swampy own partnership is under great strain – the Stranger does not trust him anymore. There are major cracks in all of the relationships and this comes to ahead.

Hare has a fantasy. A fantasy from childhood, of Knights and Dragons. It has developed as she has, and influenced her desires, desires which her husband, Badger, can’t relate to. Badger’s fantasy is to lead his country to winning the world cup. His reality is to wear the teams latest jersey and take his frustrations out on Hare’s fish. Stoat is Fox’s lover. When his desires cause her to leave him, she seeks refuge with Badger and Hare. But Fox proves is a catalyst for their darkest longings. When these are unlocked, none of them will ever be the same.

‘No. The world was denied the opportunity to see how fucking worthless I
could have been.’
‘I’m sorry.’
‘Don’t be. We can’t all have lives to lose.’
Counting is about revenge and regret. Following two brothers, one living and
one dead, it is about the nature of forgiveness and the mistakes that make
up our lives.

Rua O’Donnachu is a writer and the co-founder of Maylin Productions. Maylin are a new theatre company set up in 2010 to encourage new writing. They produced the hit comedy Men are from Stoneybatter, Women from Phibsboro in 2010/11 as well as Memoirs of a Dublin Bus Driver in June of this year, both of which were written by Rua and were received very well by audiences. Earlier this year he was also approached by the New Theatre and asked to come on board as writer for their production of Brian Cowen and the Seven Deadly Sinners. Rua attained a University of Wales BA (hons) degree in Performing Arts and Theatre studies in 2007 and since then has been working as an actor, writer and director in theatre and film. He hopes to produce this play you will hear read today, The Dead Woman’s Son in early 2012.

Fifty-one-year-old Arthur Sheridan lives in Artane and has been writing for most of his life. In that time, he has won some awards, including the Mirimax Award in 1996, which saw his training as a writer in Hollywood. He came joint first place in the 2011 PJ O Connor Awards, for the play No Room For Angels. He attended IADTDL, where he received a BA for directing, and an MA in script writing. His play Spider was performed in the New Theatre in 2010. He presently works in Dublin City Council.

This is Dónal’s first professional theatre production. Dónal began acting two years ago when he joined the ‘Gaiety School of Acting’ and the ‘Independent Theatre Workshop’. He has spent two years in the ‘GSA’ part-time, completing ‘Performance Year’ and ‘Advanced Performance Year in Acting’. He also attended the ‘Independent Theatre Workshop’ for one year.
He recently starred in a short film entitled Bayonet by Red Splash Productions, directed by Anthony Downes, which will premiere later this month. His feature film work includes On The Ball!, Death of a Superhero and Hideaways. Dónal loves working on films, but his time in the Gaiety has given him a real passion for live theatre. Aged 21, his young look benefits him in that it allows him to play a variety of roles in terms of age.

Gail recently played Doreen in Livin’ Dreds production of Ride On directed by Pauric MacIntyre. Other theatre includes THE GOOD FATHER also with Livin Dred. TRANSLATIONS, FAITH HEALER and METAMORPHOSIS for Black Box in Prague,DI DI’S BIG DAY and OUT OF ORDER SWEETIE for Lane Productions, WE OURSELVES, BUDDLEIA and NATIVE CITY for The Passion Machine ABIGAIL’S PARTY New Theatre, 16 WORDS FOR WATER The Crypt (Irish Times Award Nomination), THE COUNTRY BOY New Theatre, THE TROJAN WOMEN Beckett B Co., FAUST at The Gaiety, LOVERS AT VERSAILLES at The Abbey and SHINING CITY at The Gate. Television credits includes: PURE MULE – THE LAST WEEKEND, PURE MULE, WHISTLEBLOWER, THE RUNNING MATE, THE CLINIC, FAIR CITY, FR. TED, MARJORIE and THE BLIZZARD OF OD. Film credits include: STELLA DAYS, TRIAGE, PASSING TIME, STRENGTH AND HONOUR (for which Gail was nominated for a Best Supporting Actress IFTA), CALL GIRL, EVEYLN, HOW HARRY BECAME A TREE, ANIMAL FARM and WHEN THE SKY FALLS.

Jane McCarthy graduated UCD in 2007 with a BA in ‘English Literature, Poetry and Drama’. Her first play, Epilogue which she wrote and directed, debuted in 2009 as part of The New Theatre’s first season of New Writing. While primarily a writer, she has also worked on many productions as Assistant Director, including The Quare Fellow (The New Theatre) 2010, Men are from Stoneybatter, Women from Phibsboro (Maylin Productions) 2009, 2010, Brian Cowen and the Seven Deadly Sinners (The New Theatre) and Airswimming (Idir Mná), 2011. She is delighted to have this opportunity to get back to her first love, writing.

Vincent A. O’Reilly is a director and playwright. He has an M.A in Directing for Theatre from U.C.D. and was a participant on the 2011 Gate Lab Directors Symposium. In 2010 he completed a year-long director’s mentorship programme with Jim Culleton of Fishamble in association with K.C.C. He is the Artistic Director of Sheer Tantrum. Current projects: A new version of Ibsen’s The Master Builder (Writer/Director, The New Theatre, February), I am Thinking of Your Dreams (Director,Valencia, 2012) The Applicant (Writer/Director, November, The Pearse Centre). Previous directing credits include: Skip to the End (K.C.C and Fishamble), All The Kings Horses (Project Arts Centre/UCD Directions 7), Pilot (The Exchange), The Applicant (Smock Alley), A Year in the Life (The New Theatre), After Juliet, Intensive Care (Moat Theatre), The Miracle (Riverbank Arts Centre/ Everyman Palace), A Year and a Day, Definition and Dracula (Riverbank Arts Centre). Assistant directing credits include: Noah and The Tower Flower (Fishamble/ Civic Theatre/Drilling Company, New York), The Magic Flute (Glasthule Opera/The Pavillion Theatre), Mouth to Mouth and The Bird Trap (Crooked House/Project Arts Centre). Writing credits include: All The Kings Horses, The Applicant, Definition (Self-directed) and Frankenstein (Moat Theatre).

Nicole Flattery is a Drama graduate who recently completed her studies in Trinity College. This is her third time writing for the stage and her second time working with director Rosemary McKenna at the New Theatre. Having had her play, The Living End, produced in the New Theatre as part of The Ten Days in Dublin festival, Nicole is excited to be welcomed back into such a creative environment. 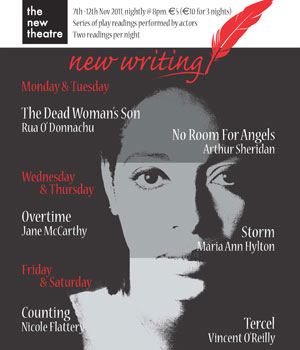