Curl Up and Dye

Curl Up and Dye is a play about two sisters – Fiona and Angeline. The daughters and successors of once famous salon owners, have cut themselves off from the world, run the salon into the ground and haven’t been seen or heard from in four years. However, a smell is now starting to emanate from the boarded up salon. Complaints are being made by neighbouring businesses and the controversy over the depletion of the formerly successful business has attracted the attention of two documentary film-makers.

Curl Up and Dye takes place in real time over the course of one hour. The documentary makers are filming the antics of Fiona – who is still convinced she’s running a business and fiercely determined to hold on to it, and Angeline – who although has been known for her talent in hairdressing is more interested in her dog, Alfred, who she lives for. Fiona ensures that Alfred is ‘kept’ outside but Angeline is afraid to go outside without Fiona which means she never sees Alfred. Through the eyes of the film makers we see how Fiona and Angeline’s split personalities largely contribute to the day to day running of the salon. They have run out of food, they have run out of water, and the person who has enabled them to stay in this world of their own creating seems to have disappeared. The health and safety authorities are knocking down their door – but by the time they actually get in it’s too late. By the end of the play their world has crumbled. Angeline ends her life and Fiona is removed from the building.

Anna is a graduate of The Gaiety School of Acting. She has trained in contemporary dance with Echo Echo Dance Theatre Company. Anna has been writing casually until two years ago when she started devising and writing Curl Up and Dye.

About Lisa Fox
Lisa is a Dublin based actress. She graduated from The Gaiety School of Acting full time course in June 2009. In the year following graduation from GSA Lisa performed, produced and toured a One Woman show Bombshells by Joanna Murray Smith directed by Stefanie Preissner. She also appeared as Nora in A Doll’s House with With an F Theatre Company. Throughout her career she has had a strong interest in creating and working on new writing.

She is also a graduate of DIT with an honours degree in Film (theory and production). She has performed as a burlesque singer with The Tassle Club. She is an experienced and Leinster champion fiddle player.

Lisa has always been involved in writing and has had many poems and short stories published through her local writers group as a teen. Curl Up and Dye is the first full play script which Lisa has co-written. 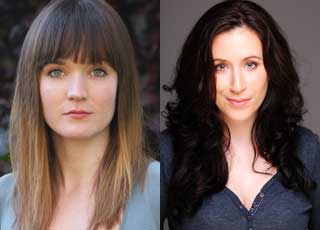