Sex, Drugs and Racing Pigeons.
Sandra is late,
Tim’s in love
Susan is back on the gear
Where will it all end?
Billy The Boat loves Angelina

This play tells the story of three young siblings, Susan, Sandra and Tim Smith, who in various ways are caught up in the drugs scene in Dun Laoghaire. Susan has been clean for nearly a year but when she meets Rayo, King of The Underworld she finds herself drawn back into the seductive world of heroin. Tim has just fallen in love with Angelina – his first pigeon, but when he meets Mike at the pigeon club it leads him to face his own emerging sexuality. Sandra is fiercely loyal to Susan and despite the fact that her own life is about to change irrevocably, she’s determined that nobody will drag her sister back into the darkness.

The Rules
with Gina Costigan
(18 months later)
Sandra has always prided herself on living by the rules but as she waits through the night for her boyfriend to come home we begin to realise her future holds a tragic secret. 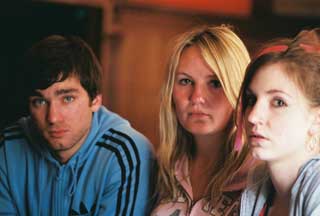