Dir. István Szabó. 1985. 144 min. German and Hungarian, with English subtitles.
Script: Péter Dobai, based on the play A Patriot for me, by John Osborne.

Gay period drama about duty, disappointment, entanglements, espionage, and lust. Based on a real story.
Growing up as an army cadet in the days of the Austro-Hungarian Empire, Alfred Redl learnt all about the suppression of individuality and putting one’s life at the service of a greater good. There are two things that the army did not manage to crush altogether, even after Alfred raises in the ranks to become a colonel: his fear that his serenity and self-control may be just an act, and his attraction for the impulsive Kristóf. Colonel Redl is sure of one thing only, his faith in the Habsburg monarchy. But when he gets embroiled in political intrigue, and his homosexual tendencies are put on the table like bargaining chips, he begins to see another side of history… Could it be that professional politics is run by mercenaries, could it be that the Empire is rotten at its core, could it be that his life-work has been for nothing? The original play had been banned in England in 1965, but the 1985 film version won the Jury prize at Cannes.

Brandauer should have gotten a prize too, because he is absolutely superb in the title role. This is a brutal drama about the price of sacrificing yourself to the demands of society, and the moral is clear: live your life!!

For membership www.filmqlub.com , or at door on the day 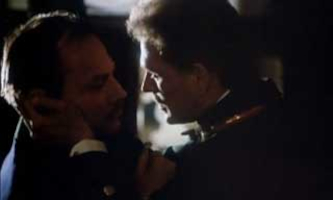