Waiting For The Moon

A beautiful film about married life “in illness and in health”, based on the relationship between the poet Gertrude Stein and Alice B. Toklas
Paris in the nineteen twenties: a bunch of rich expatriate lesbians were having a blast. In their spare time between parties, salons, and picnics, a handful of these women wrote some of the most exciting and radical books ever published. One of them was the poet and art patron Gertrude Stein, a close friend of Picasso, Hemingway, and Apollinaire (all of them appear in the film), who made a formidable team with her partner Alice B. Toklas.

Together they created a home and became the most famous lesbian couple in the world, together they revised Gertrude’s experimental poems, and together they faced her cancer diagnosis. Stein had an exquisite command of the written word, but when it came to talking about her feelings, she was reserved and uncertain, so Alice had to teach her what ‘sharing a life’ truly meant. Although it is a bit annoying that the script eliminates any signs of physical affection between the couple, we are left with a moving portrait of unshakeable love and devotion, and with the magnificent performances of the perfectly cast Linda Bassett and Linda Hunt. 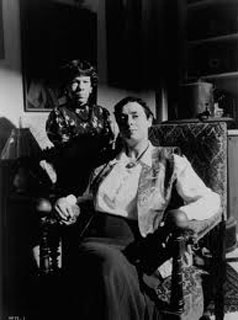