Disaffection is a new writing theatre company. Our primary aim is to create universal, timeless work through the observation of human relationships. Our work is a mirror for society to view themselves in, rather than a rhetorical political diatribe. Through focusing on human conflict we hope to reveal the audience to themselves and provide a deeper understanding of our existence. It is our aim to promote new writing, and new writers. We also encourage the involvement of emerging theatre practitioners wherever possible and practical.
Our first production is a new play called Time’s Tide.

The lives of Danny – a washed up talk show host, and Clara – an aspiring opera singer who makes ends meet through prostitution, collide to expose the fragility of achievement and ambition. Danny Hall has been a successful chat show host for nearly twenty years. Lately, his performances have been substandard, which he blames on the poor quality of guests. Sarah, his ex-wife/producer, is of the opinion that Danny simply can’t hack it any longer. Danny has one foot in the past, nostalgic for his mid-nineties heyday, but now longs for better quality guests, or a new platform for his changing tastes. Clara is a talented soprano, longing to sing professionally, but at thirty two, time is against her. Victor is a retired vocal teacher who worked in opera for many years. He agrees to help Clara achieve her goal of becoming a professional opera singer. This is as much an opportunity for Victor as it is for Clara, a chance for him to contribute to her success, a chance for him to feel relevant.

About Niamh Moroney – Producer
Niamh was a founding member of Devious Theatre Company of Kilkenny. She worked with Devious as producer and director from 2006 until the end of 2010, on an average of four productions per year. During this period Niamh attended UCC where she attained a degree in drama and theatre studies. She has worked with, and continues to work with, numerous Cork based companies including Hammergrin, Roundhouse, Conflicted Theatre, and Moocow productions. She produced for the new writing section of the Midsummer Arts Festival 2011 under Lynette Moran of Live Collision.

About Del Lennon
This is the fifth full length play that Del has written, but is his first to have a full production. Time’s Tide has been chosen to have a reading at The Theatre Royal, Stratford East, London, on the 5th January 2012 by the prestigious London group, The Script Readers. He is a founding member of Disaffection and organiser of the monthly play reading nights in The Workman’s Club, Dublin.

About Kevin Mooney (Director)
Kevin Mooney was the co-founder of Devious Theatre, where he became a writer and director. Kevin co wrote the award winning adaptation of War of The Worlds, which claimed Bronze in 2009 with the PPI National Radio Awards. His directorial premier was Heart Shaped Vinyl, written by John Morton, he then went on to direct Cannibal! The Musical, and War of The Worlds. Time’s Tide is Kevin’s directorial debut in Dublin. 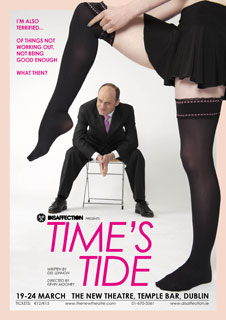