Michael Downey was a rising star on the comedy circuit until a near fatal car accident in 2002…
…now he’s standing up again in the 2012 Edinburgh Festival.

About Michael Downey
Michael Downey started writing at the age of three and a half just before he started his formal education in school. His early work has sadly been lost because the Downey’s left the wallpaper on the house they had occupied on Revelstoke Road in London and no doubt the current residents have redecorated since 1969. Even the crayons Michael would have used have mysteriously vanished but will probably appear on ebay when he passes away.

His creative writing then hibernated for a while as he went through school and college although he did write something witty about Seamus Molloy in the toilets of The Shack in Athlone.
Some time after he’d left college and joined the working world Alan Donnelly was approached by Ardal O’Hanlon to write some stand up material as Ardal was in the middle of writing his first novel “Talk of the Town”. Alan asked Michael to help out (unfortunately he couldn’t remember the thing he’d written about Seamus Molloy) and they were both given writing credits on the BBC’s Stand Up Show.

As a consequence Kieran Donnelly suggested that Michael attempt stand up comedy himself and, with Kieran, Michael decided to try it out and see could he do it. It turned out he could and in three short years he’d given up his van driving job and had become a full time stand up comedian regularly playing venues in Dublin, Galway, Cork, Belfast, London, Manchester, Glasgow and Edinburgh. Unfortunately three months into this new occupation he was involved in a major road traffic accident and even this traumatic event didn’t jog his memory and so the remark about Seamus Molloy has been tragically lost forever.

During his recovery from the accident he along with Alan and Eileen Gordon Lonergan (the heart and lungs of the company) formed the New Hat Theatre company. Michael had written one of the one act plays that New Hat produced in 2005. In 2008 he wrote a full length a full length play called “Answers” which the New Hat Theatre company produced for two weeks in The New Theatre. Similarities in company names was purely coincidental and only reflect similarities in attitude. The play went well and instilled Michael with enough confidence to get back up on stage in late 2008. He has gotten his comedy legs back again and is regularly performing in the clubs around the country. He has decided that this year he is going to take his first full length solo show to the Edinburgh Fringe. 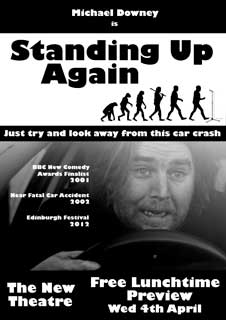