Director: Lisa Mulcahy, Rachel Brady
Worth explores the life of Jenny Lavelle, an eighty year old woman living alone in a large house in Ballsbridge. Her son, Des is a solicitor/property developer who has set his sights on his mother’s fortune. It is 2007 and Des is putting pressure on Jenny to sell the extremely sought after family home as property prices are forecast to fall. With her independence under threat, Jenny decides to hide her weakening heart condition from her son for fear he will bully her into leaving the house she has lived in for fifty years. Jenny becomes friendly with Paula, the young woman who has moved into the house next door. Paula Harte is married to one of the wealthiest men in the country and seems to live a charmed life, but a faulty telephone connection leads Jenny to discover that she and her new neighbour have a lot more in common than they might like to admit.

About Ger Gallagher
Ger Gallagher is the author of three novels. A Life Left Untold, Broken Passions and Shadow Play. Ger trained as an actress and worked in film and theatre before she embarked on a writing career.
Worth is her first work for the stage.

About Lisa Mulcahy
Lisa is a film and television director having come up through the ranks of assistant director on many Irish and foreign feature film and television productions. She dipped her toe into the role of theatre director when she directed a play; the comedy, Who’s on first, which was performed at The Andrew’s Lane Theatre when it was alive and kicking, and also toured to Galway. It was her first time directing actors and it instilled a determination in her to pursue her career in directing. Lisa is delighted to be back in a theatre again.

About Rachel Brady
Rachel started her career as an actress in Ireland before moving to London where she spent a decade working as both an actress and television and radio presenter. She returned to Ireland to live in the wilds of Wicklow and is tentatively looking forward to her first time on stage in a while.

The reading will be directed by Lisa Mulcahy

Reading the part of Jenny Lavelle

Reading the part of Paula Harte

Reading the part of Des Lavelle

Off stage voice of Sharon (Paula's sister in Boston)

Reading the part of Simon the auctioneer 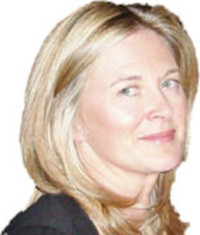