Beyond The Bookshelf: Micro Music Festival

Home  /  Music   /   Beyond The Bookshelf: Micro Music Festival
Back to events

Beyond the Bookshelf is a new independent music mini festival, staged in Temple Bar’s New Theatre.
“A micro music festival….”
“It’s probably the smallest festival in the world”

Now in its second year, the festival and venue are quickly gaining a reputation for intimate and electrifying performances.
The venue seats 66 people. The Theatre is a beautiful and intimate bespoke space, adjacent to the Project Arts Centre in Temple Bar, Dublin, and is at the rear of the Connolly Book Shop, which gave rise to the festival’s name.

The festival will feature two main acts per night, plus an act who will perform in the bookshop. Many of the performers will rarely be seen in such a small space.
The whole event will be filmed for the most part in HD and all audio and video footage will be available to each of the bands involved.

Thursday night sees the ever wonderful and hugely prolific Duke Special. In one of his most intimate performances to date, we can expect a rare insight into the music and of one of Northern Ireland’s finest song writers. He is preparing to release his newest album.

This year it is our great honour to welcome back Si Schroeder who gave one of the stand out performances of 2011’s festival. He/they will headline Friday night. Putting the finishing touches to his new album, the follow up to his 2006 Coping Mechanisms, Si Schroeder will be playing both older and yet to be released material on the night.

Saturday night sees Dublin’s finest The Pale unleash some new songs on the eager ears of the festival goers. The Pale hail from Dublin and formed in 1990. The Pale had a unique and unusual style from the very beginning. The vocal, mandolin, drum machine, bass, and acoustic guitar lineup of The Pale had a very individual approach to songwriting, to say the least.

Once again we have been overwhelmed by the generosity of the acts who will be appearing. They share our love of this amazing space, which is without a doubt one of Ireland’s best kept secrets. Hopefully we can do our bit to change that!!!

In addition to the performances in the theatre space, there will be acoustic performances and DJs in the bookshop itself.
Tickets are 12 euro each, although bookshop performances will be open to anyone who pops by.
NOTE: Shows will be recorded and filmed – so dress nice 🙂
www.beyondthebookshelf.net 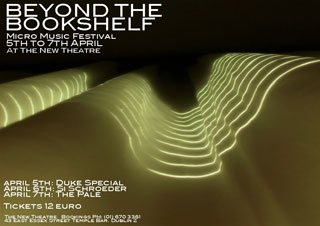