Drama presenting political repression and the repression of sexuality as two sides of the same coin.
This is the story of Éva, a talented journalist determined that the newspaper she works for, “The Truth”, will honour its name. Living in Budapest under a Stalinist satellite-regime, Éva refuses to compromise either in her writing or in her life, and as a result she has been black-listed as a lesbian by the authorities. In Hungary in the 1950s, the resistance is reduced to unconnected individuals trying to survive; very much like the lesbian underground, where women rely on sideway glances, discreet notes, and furtive meetings. When Éva meets Livia, they discover they are attracted to each other, but will Livia have the courage to abandon her settled life and choose “another way”? The first mainstream gay feature from Eastern Europe, Cannes Film Festival nominated it for best film of the year and gave the best actress award to Jankowska-Cieœlak. Despite some weaker points (the stereotypical dark-butch vs. blonde-femme casting, for one), the film has many powerful moments and much food for thought. In an interrogation scene, for example, the arrogance and ignorance of the heterosexual world are presented as a form of unofficial torture. Another Way ends in 1956, when the Hungarian Revolution’s popular upsurge for democracy was crushed by Soviet tanks, underlying the fact that personal and collective history always run a parallel course. 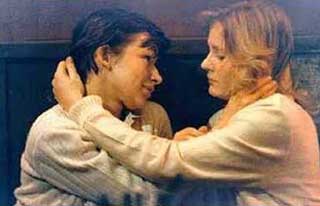