Love In The Title

“Life has to be lived forward, but it can only be understood backwards” -Katie.

Three generations of Irish women meet at the site of Clough-a-Regan in the countryside outside Limerick. Katie (aged 37 in 1999); her mother, Triona (aged 30 in 1964); and her mother’s mother, Cat ( aged 20 in 1932) discuss their lives, loves and relationships in this fantastical meeting across the ages. As they enthuse, bicker and argue they try to understand each other and ultimately their own place in the world.
Following their huge success with Brian Friel’s Lovers last June, Room to Move Theatre Company return to the New Theatre with their second production. Hugh Leonard’s hilarious and thought provoking play examines issues of motherhood, family and sexuality throughout Twentieth century Ireland. A gem from one of Ireland’s leading playwrights. 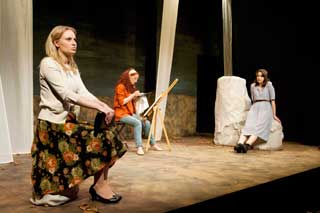