A Debate On The Fiscal Stability Treaty 2012

Temple Bar Traders Association, the not-for-profit organisation that represents business, Arts and services in the area today announced details of a debate on the fiscal stability treaty to be held in Temple Bar. The debate aims to engage and inform business and arts organisations in the area on the upcoming referendum.

Martin Harte Managing Director with Temple Bar Traders hopes that the event will make the Temple Bar Community in Temple Bar aware of the effect that the referendum will have “We think that it is vitally important that the business and cultural organisations in the area are aware of the impact that a yes or no vote will have on the Temple Bar Area. For example many arts organisations rely on funding from government bodies and they will need to know how they will be affected. It is estimated that approximately 15pc of the entire national spend on arts activities comes to organisations based in Temple Bar. In this debate the importance of the Temple Bar area must be recognised. The Temple Bar area is responsible for 1/6 of the Irish tourism product, 1/3 of the Dublin Cities Turnover and employs 10,000 people. As a key player in the Irish economy understanding the effect of the Fiscal Stability Treaty is of utmost importance – we hope that this debate will give those in the area a clearer understanding of its effects.”

This debate is particularly relevant to the Temple Bar area given the amount of EU funding that has been invested in the area. In the early 1990s Temple Bar Properties Limited received an initial grant of £37million and was allowed by the EU to raise additional funding of another £40 million and another amount through its property portfolio in total expending £140Million on the plan repaying all but £40Million treated as seed money; the private sector has invested in excess of £100Million up to 2001. 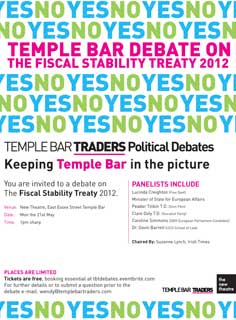